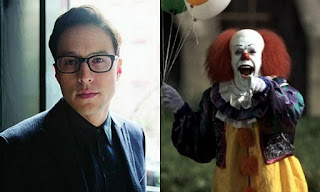 I have been a huge, huge Stephen King fan all of my life. I have read a great number of his stories, and I started at real young age. My dad would talk about King's work, and he introduced me to him, and I've been hooked ever since. I read "It" at the perfect time in my life. The book took place in a summer in the 1950's, and it was summertime when I read it. The main characters were early teenagers in the first half of the novel, and I was that age when I read it. I felt like that elevated the experience for me in a huge way. I loved the book, and that same summer, I watched 1990 mini-series of it.

At the time, I was pretty frightened by it. I thought Tim Curry did an extraordinary job as Pennywise, the evil shape-shifting clown that terrorized the main characters in the story. As I got older though? Well, Pennywise almost feels like Freddy Kruger. After you reach a certain age, he isn't scary anymore, he's funny. I was hoping someone would come along and make the version of this story that would haunt my dreams, no matter  how old I got. So when I heard a few years ago that Warner Brothers was seriously considering giving the a new, cinematic, R-rated treatment. I was happy as could be. Not to mention that Cary Fukunaga, who gave us the first season of "True Detective" was going to make a two-movie adaptation of the book (the book itself is almost 1100 pages). Re-watch that first season of "True Detective." Its creepy in a surreal, disturbing kind of way. Fukunaga proved was brilliant at crafting a happy town suffering from hidden decay, just like the town of Derry, Maine. He proved he could make an unease in the middle of broad daylight, again just like King's book. I thought he'd be the perfect fit, and I couldn't wait to see what he came up with.

Then, he left the project...

Some say it was over budget, but many reports point at Fukunaga's clashes with the studio. Fukunaga wanted to make a character driven horror film. A slow burn horror film. Something that would linger in our minds. But the studio apparently wanted boo-scares and cheap thrills. All the cliches that literally haunt the genre today. I could understand why Fukunaga stepped out, and then Andy Muschietti stepped in. Its Muschietti's film that is being released this October.

I was always curious about Fukunaga's plan. Especially since he cast Will Poulter as Pennywise. In the book, its said that Pennywise is supposed to be middle-aged, Poulter is younger than me. I was curious, sure, but a little baffled. Fukunaga also changed the time a bit. The first half of the book takes place in the 1950's, the last half takes place in the 1980s. Fukunaga's movie (as well as Muschietti's upcoming movie) takes place in the 1980's, then moves to present day. Believe it or not, the timing is important. Pennywise isn't just some psycho in a clown. Its an otherworldly entity from another world, it feeds off of humans. It takes the guise of a clown to lure children in, as they are the easiest prey. But it can shapeshift into whatever scares you the most, because when your afraid, you taste better. In the 1950's, the classic horror monster movies were being released, and in the book Pennywise would transform into the Wolfman and the Frankenstein Monster. In an odd way, it worked the way it was written. As I think of the setting for the movie, what would Pennywise transform into? Freddy Kruger? Jason? Michael Myers? Chucky? A Xenomorph? Would that even work if the WB doesn't have rights to those characters?

Tonight, I dug into Fukunaga's "IT" script. As a fan of the book, there were things that I really loved about the script, but there were just as many things I didn't love about the script. One thing I will say though, we wouldn't have had to worry about Pennywise's various transformations. All the scares in Fukunaga's script are all Pennywise-based. Aside from maybe one moment, all the classic transformations from the book are omitted. The moment with Beverly and the sink is there, but that's about it. We only get glimpses and flashes of Pennywise. As I kept reading the script, I got puzzled. Didn't Fukunaga spend all this time in interviews telling us that his version was going to be different? That the studio wanted "boo-scares" but Fukunaga? The script reads like most of Pennywise's moments in the film are intended to be "boo-scares." So I wonder what Fukunaga was thinking. How they are written, I will admit, I could see how it could have been scary. But it reads like "boo-scares" on the page, and those are my least favorite kind of scares. Those aren't the scares King wrote in his book. "IT" was a very surreal story, it was a disturbing story. This just seemed like a funhouse movie through most of my readings.

The other big red flag is Pennywise himself. Here's the thing with Pennywise from the book. He was never, ever in the book, a "scary" clown. He was goofy, innocent and childlike to children in order to lure the children to him. Then when he knew he had the children in his grasp, that's when he got sinister and evil. Before the children knew it, they were dead. Fukunaga's script reads like Pennywise is sinister all of the time. It completely misses the point of King's book and the character he created. Pennywise isn't some Joker riff, he is nothing like The Joker. Pennywise isn't creepy all the goddamn time. That's the biggest mistake anybody making an "IT" movie could possibly make. What kind of child would walk within twenty miles of a scary-looking clown?

What does work about the script? Well, the character work is dead on. I love the characters in this script. If you've read King's book, I want you to know that Fukunaga nailed everything that made Bill (Will in the script), Richie, Beverly, Ben, Eddie, Stan and Mike so memorable in the book is shown loud and clear here. You would have loved the kids had Fukunaga made  this, and Fukunaga effortlessly yet carefully etches in the details on the characters. You would have been deeply disturbed by Henry (Travis in the book) and his gang of bullies, as well as Beverly's dad Mr. Marsh. The character work would have been powerful here, and I know Fukunaga would have got the most out of the actors he cast.

Derry itself is also something of note in the script. The entity that would become Pennywise crashed in the land that would become Derry very far in the past. I absolutely loved that we feel Pennywise's presents in subtle moments in the script. Derry in this script feels like a town haunted. A character looks at a mural on a building and sees a clown in the distance, characters will randomly come across balloons in their house or in their mothers purses, people will randomly smile viciously when angered about something, the storms are really bad here. It feels like a town under  the influence of something that is pure evil. You can feel  that coming off the pages of the script. It is very strong writing, and I hope that Muschietti can somehow adapt that feeling into his movie, Derry should feel like a haunted town. I am disappointed though, that the script doesn't get into the full cosmic craziness that the book did. The Ritual of the Chud is completely omitted here, and it kind of drives me nuts. The ending itself kind of drives me nuts. I mean, the kids "kill" Pennywise with household weapons? Again, Fukunaga completely misses what King was aiming for with his book, and replaced it with an ending that would have had the audience reeling with laughter as they left the theater.

Here's the thing, apparently Warner Brothers liked Fukunaga's script. Muschietti has left lots of it intact, while adding some of the classic scenes from the book and then having some other writers patch it up for their budget. The 1980's setting is still there. So I don't know exactly how much of what I just read will be in the finished product. This kind of scares me. Yes, there is some good material here, but the very essence of King's story is mostly missing, and it feels like in some places, like a conventional horror movie. "IT" should be anything but a conventional horror film.

With that said, I think the moment in the script where Pennywise chases a kid on all fours with another child's dead body strapped to his back is a image I won't be able to get out of my mind. There is some strong writing here, this draft was early in the process. So there is a possibility that it could have changed a bit before Fukunaga began filming. Who knows. All I do know is that if this is the script Fukunaga wanted to shoot with, all I can say is...crisis averted.

Posted by Shawn Hoelscher at 9:02 PM