After all the "Hunger Games" and "Harry Potters" and "Divergents" coming our way recently, I knew it was only going to be a matter of time before we got an adaptation of "The Dark Tower." To be honest though, its been in the making for awhile now. Its just been constantly shelved, and constantly jump-started. Its gone up and down in development Hell, and for awhile I never thought we'd actually get it. Now in four months, we will actually finally see The Dark Tower come alive.

This is a series of novels by Stephen King, about a gunslinger named Roland trying to make it to the Dark Tower. It was series of seven or so books that blended fantasy, horror, western and some other genres, you'd think that they wouldn't go together, but somehow Stephen King made it work. For the most part, at least. Idris Elba will play Roland and Matthew McConaughey will play the film's villain. It will be interesting though, since apparently, they are not making an adaptation of the books, but a continuation. Will you have to know the books before you see the movie? I honestly have no idea. 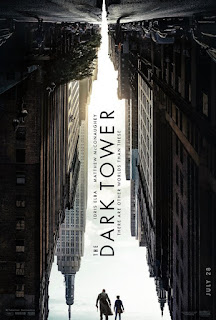 The first poster dropped today, and it looks cool I guess. I kind of feel like its borrowing a little too much for "Inception" and "Doctor Strange." This is really not what the world of "Dark Tower" is supposed to look like. Not particularly, of course. Its tough to describe without getting into spoilers. But the world of  "The Dark Tower" is very different from our normal world and I don't quite know if we will see it in this movie. It was definitely not pieces of other pop culture, it was its own thing. I hope the movie showcases that as well.

But it does look kind of cool.

Posted by Shawn Hoelscher at 7:47 PM