My Reaction to the 89th Annual Academy Awards 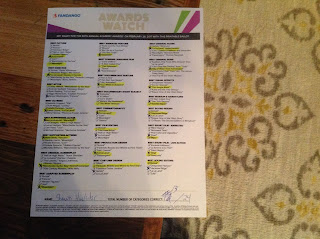 I got thirteen of the my twenty-four Oscar predictions right this year. I don't remember the last time I did so poorly on my predictions. It was a night full of upsets, and I guess since we are discussing movies that came out in 2016, that makes perfect sense. Seems perfectly fitting where we would get a Best Picture that won the popular vote and another that won the electoral college. It seems fitting that we would have a ceremony that ended with the revealing of alternative facts or an ode to Steve Harvey or whatever that was. Honestly, I don't feel bad for doing so poorly on my predictions this year. I do them for fun not money. If I did do them for money, I would have a massive problem right now. I think this showing of winners this year proves how strong a movie year it was last night. Usually with the Academy Awards, predicting winners is wildly easy. There always seem to be "givens" with most years, but not this year. This was the most unpredictable year I have seen in awhile and I should have just thrown my prediction sheet to side and enjoyed the ride!

With winners coming from every which way, trying to discuss upsets is a little hard. It seems some winners were never even in the discussion of winning. "Suicide Squad" now has as many Oscars as "Citizen Kane," fucking weird right? We weren't expecting "Hacksaw Ridge" to win in the categories that it did. It's been a weird and strange ceremony this year. But even though everything was a surprise, there were still some big upsets. Casey Affleck winning over Denzel Washington? Tragic. Extremis not getting short documentary? Tragic. That whole Steve Harvey announcement of Best Picture? That was just, beyond tragic. I don't know if they made multiple cards of winners and they accidentally put another Emma Stone winner card in the Best Picture envelope? Or was this a big joke between Warren Betty and Jimmy Kimmel? I am not exactly sure what happened, but it was not funny, it was stupid. I am glad "Moonlight" won though, great great movie.

How was Jimmy Kimmel as a host? Well, he started out really good, but some the things he was doing got annoying fast, I thought. The dropping candy from the ceiling was funny (maybe) at first, then got old fast. The Matt Damon feud was funny (bigger maybe) at first, but then got old fast. There were moments when Jimmy Kimmel was laugh-out-loud funny and other times where he didn't seem to know what he was doing. I will say I liked the Oscar edition of Mean Tweets. I thought the surprise walkthrough of the Oscar ceremony was cool, although it was blatantly obvious that it was staged. He was just mediocre and I was kinda hoping he'd be great. I am a little sad to write this, but I don't think I really want to see Jimmy Kimmel host this again. I love your show dude, but you're no Oscar host. The Academy needs to find a consistent host to really draw things in each year, like what they did with Billy Crystal or Steve Martin and Alec Baldwin. I still hold hope that Seth MacFarlane will be interested in hosting again.

"Suicide Squad" winning best Make-Up was random, and its even more random that "Suicide Squad" has as many Oscars as "Citizen Kane." I am happy for the categories that "La La Land" did win in, I know lots of people find that film to be typical Hollywood dreck, but I throughly enjoyed the film. I was happy Viola Davis won Best Supporting Actress and that her heartfelt speech was not cut short to keep the show moving. I am glad "The Jungle Book" won for Visual Effects, even though I would have loved to see it go to "Doctor Strange." I loved that Mahershala Ali won Best Supporting Actor. I am happy Emma Stone won for Best Lead Actress. I liked some of the reflection stories some of the actors did, discussing their favorite movies. Even though I think the Javier Bardem one was made just to stroke Meryl Streep's ego more. Jesus, why does Hollywood worship her so much? I don't agree with our new President on much, but I would discuss with him for five hours on how overrated Meryl Streep truly is as an actress. I mean, she NEEDED a standing ovation at the beginning of the ceremony? Really? What has she done besides playing the same character in every movie? Drop it already! My favorite thing this ceremony did though, was remind me how much I loved "Cinema Paradiso." If you have not seen "Cinema Paradiso," you need to track it down ASAP!

Anyway, weird ceremony overall. But it adds to the flavor of what 2016 as a year truly was. I don't know if I want another Oscar ceremony like it next year, but I hope 2017 presents another rich year of movies where predicting the winners will be just as difficult. Now, its time to officially stick a fork in 2016, its done. Now its time to catch up on 2017. I've got a huge host of new reviews to get going on, and the train to the next ceremony starts all over again right now. Enjoy!

Posted by Shawn Hoelscher at 10:15 PM