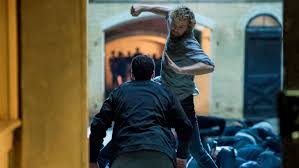 Well, on March 17th, it will finally be here. The last introduction before the main event. The last superhero of Netflix's corner of the Marvel Cinematic Universe will finally be revealed. We will meet Danny Rand, aka Iron Fist. Then, later on this year, Iron Fist will meet Daredevil, Jessica Jones and Luke Cage and they will all battle evil in Hell's Kitchen together. I can't wait for it.

Although, I am excited by "Iron Fist" and to finally see "The Defenders," I couldn't help but feel kind of underwhelmed by the trailer. I will admit, Iron Fist is a character from Marvel that I am not fully knowledgable on. I know he was a rich guy whose father traveled to a mystical pocket universe. There, Daniel learned of mystical forces and became a practitioner of martial arts. That's just about as much as I know. After viewing the trailer, this honestly looks a little too "Batman Begins-ish." I mean Danny clearly spends lots of time training in K'un L'un, the pocket universe I talked about. Then he comes back and finds out his dad's company is corrupt? How is that not too much like "Batman Begins" or even the CW's "Arrow?"

I don't want this show to be a dud, so I hope this isn't exactly what I am seeing. Telling from this trailer, he looks extraordinarily powered. I am hoping for some more coolness.


Posted by Shawn Hoelscher at 8:54 PM