Couch Potato In Print (The Sequel) 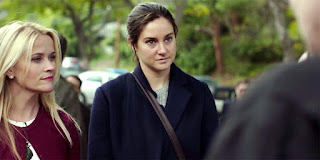 Remember what Paul Rudd said in "I Love You, Man" regarding HBO? HBO on Sunday night to be more specific? Well, he said that there is nothing like watching HBO on Sunday night. Well, at least something along the lines of that. For many years since my fiancee and I have collected HBO dvds and got cable to watch shows, I have to agree. HBO on Sunday nights feels like an event, like something almost otherworldly. Just like every movie studio though, each cable or television network has their black spots as well. I am beginning to believe that "Big Little Lies," the new mystery with Reese Witherspoon, Shailene Woodley, Laura Dern, Nicole Kidman, Adam Scott, Zoe Kravitz and Alexander Skarsgaard, is going to be one of HBO's few black spots. Much of it feels very much like a fictional version of a "Real Housewives" show, but with a murder mystery at its heart.

Most of last night's focused on three women. Three barely-employeed, gossipy, yuppy women. After watching lots of reality TV with my fiancee, I already laugh at how silly all those real housewives are, trying to watch a fictionalized version of them is quite the feat. It gets really tough really quickly trying to watch this in any sort of entertaining way. Then there is this murder mystery, this is where the show is truly anchored at. Somebody killed somebody else and its a big fucking deal. But the big struggle on episode one is a little girl getting choked at school and blaming it on the new boy and with the new mom in town. Its handled poorly and immediately we believe that the murder revolves around these two kids. Really? That's where the mystery is going to lie? Even if its merely a secondary storyline, it seems almost comical that a mystery in the show is cropped around who really hurt a little girl and that leads to a murder? It all seems arbitrary, but we'll see. 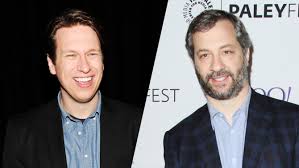 The other Sunday night HBO show that I actually kinda liked was "Crashing." Its a show from the legendary Judd Apatow, who worked on such gems as "Anchorman," "Funny People, ""Knocked Up," "Superbad," "The Pineapple Express." among others. The guy is a comedic god, and I have enjoyed quite a heavy number of his films. This first episode of "Crashing" was pretty funny. Even though I don't feel like it was the same Judd Apatow. While it had many funny moments, this feels different. But sometimes different is good.

Pete Holmes plays a character named Pete, and Pete is a comedian who is financially dependent on his wife. At the beginning of the show, Pete's wife is found cheating on him, so he vacates his own house. He hasn't been successful as a comedian, he doesn't have lots of money, and he doesn't know where he's going to go. But that is this the basis of the show, and Apatow is able to squeeze some funny moments in the first half hour of this show. Pete Holmes makes a very good lead, and I am definitely curious to see what's next. 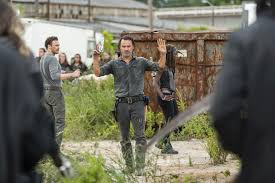 This second half of "The Walking Dead" hasn't been too exciting so far. But the season as a whole hasn't been that exciting. They introduced the infamous Negan and then, in similar "Walking Dead" fashion, they pumped the breaks. Getting to know Negan and his Saviors has been slow, and I think its funny that it almost feels like Negan's subordinate Simon is more threatening then him. Or maybe Steve Ogg is just that good of an actor. This second half of season seven has focused on Rick getting allies to fight Negan and his Saviors. Of course, its been a slow process, because this show is always in a hurry to take their time, ha! Last night, Rick met with a new group, who have been scavenging for stuff, Rick offers to bring this new group to Negan, and become allies in their fight against him. In order to prove himself, Rick had to fight what I am calling a "Mad Max" zombie. This fucking guy had spikes popping out nearly everywhere on his body. It was a sight to see. This new group was never in the comic books, so it'll be interesting to see where we go from here. But I am starting to yawn, get the war going already!

That's all for this week. See you again, soon
Posted by Shawn Hoelscher at 9:05 PM