I'm excited to see "Thor: Ragnarok" but I will admit that I am little scared of it. Telling from what I've heard, it feels like its going to be a nine-part mini-series shrunken down to around three hours. We know Hulk will appear, we know Doctor Strange will appear. We got some big supporting characters from Thor lore being introduced, the story line will have to do with the Ragnarok event, which is basically the Book of Revelation to Norse mythology. Its the end of all things. Loki will definitely be up to something in this movie. They are introducing a big, new villain and an element of Thanos' continued hunt for the Infinity Stones will play some kind of role in the movie. So yeah, this is going to be a big one.

Will it be too big to be good? Too much going on? Hard to tell, hard to say and apparently with all of this dramatic weight on the storyline, apparently the movie is supposed to be funny? The movie is being directed by Taika Waititi. He made the brilliant "What We Do In The Shadows" a few years ago, and "The Hunt For The Wilderpeople" made my top ten of last year. He's a great director, and an original voice. So it'll be interesting if he can incorporate his style of humor into this movie, that will be something. So as far as director's go, the movie is in good hands. I just don't know if he bit off more than he can chew.

We now have an official synopsis for the film, as follows:

“In Marvel Studios’ Thor: Ragnarok, Thor is imprisoned on the other side of the universe without his mighty hammer and finds himself in a race against time to get back to Asgard to stop Ragnarok — the destruction of his homeworld and the end of Asgardian civilization — at the hands of an all-powerful new threat, the ruthless Hela. But first he must survive a deadly gladiatorial contest that pits him against his former ally and fellow Avenger – the Incredible Hulk!”

Thor imprisoned? Oh my! I wonder if that has to do with Loki impersonating Odin. Hela coming into play may explain why Loki and Thor in Manhattan talking to Doctor Strange. I am guessing that Loki finds out that he's in over his head, and needs his brother more than ever. I wonder how big Hulk's role will be in the movie, but it will be bittersweet seeing these two Avengers fight each other.

Here is a set photo from the making of the movie. Nothing too fancy, unless you think Chris Hemsworth is hot. 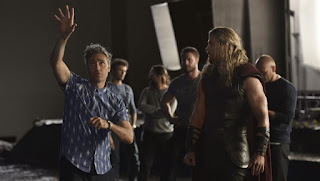 This is going to be big, but I am excited to see how it goes. Jeff Goldblum is showing up, so that alone is reason to buy a ticket. I can't wait for the first trailer!