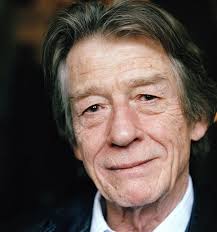 How do I even begin to discuss the career of John Hurt. How do I put into words the career of a man whose work spans six decades. How do I discuss the wide variety of films Hurt made, which included drama's, science fiction, comedy, both microbudget and blockbuster films. Hurt's career was long and definitive that you could spend time writing entire books about his work. I don't know how I even begin to discuss his work, but I will do my best.

You can't begin to discuss John Hurt without discussing "Alien." One of the best science fiction...wait, scratch that, one of the best films of all-time. A gothic horror movie set in outer space. There truly aren't too many scarier moments in all of film than the time Kane is eating food and all of a sudden a tiny Xenomorph bursts out of his chest. This is a moment that will help define movies for generations to come. Sure, the film works with the clever directing and puppet work by Stan Winston, but Hurt's acting sells the scene, he made the scene memorable. Oddly enough, he reenacted the scene in the "Star Wars" parody film "Spaceballs."

Want to know more? I got more. John Hurt was unbelievable in David Lynch's "The Elephant Man." In the film, he played John Merrick, a fictionalized version of Joseph Merrick. Joseph Merrick had severe deformities that put him in an freakshow at a circus. The movie is about his life. Hurt does a tremendous job in the role. There is a moment in the film when Merrick gets off of a train at a train station. He wears a bag over his head in public so people do not ask about his deformity. It fails, as people catch a glimpse of his face. They begin calling him an animal, but he begs to be known as a human being and a man. The role got Hurt lots of recognition, including the Academy Award for Best Actor, a BAFTA award, and a Golden Globe nominee. The film forced the Academy to create the Best Make-Up and Hairstyling Award after the Academy didn't recognize the make-up in the film.

I could go on and on. I could discuss his work on the "Harry Potter" franchise as Mr. Ollivander. I could discuss his awesome villainous acts in "V For Vendetta." I could discuss his brilliant work on "Nineteen Eighty-Four." He did work on "Doctor Who" and "Indiana Jones and the Kingdom of Crystal Skull," he voiced Aragorn in a 1978 animated "Lord of the Rings" film. There was his work in the "Hellboy" films. There were also two great performances in my two most recent favorite films with John Hurt, "Melancholia" and "Tinker, Tailor, Soldier, Spy" (a film where he shared the screen with Gary Oldman, Tom Hardy, Toby Jones,Mark Strong, Colin Firth and Benedict Cumberbatch) two movies I hope everybody sees before they die. John Hurt had over 120 roles that he called his own. He has a lifetime's worth of work for people to dissect, discuss and appreciate. The world of film lost one of their all-time greats last night. May he rest in peace.