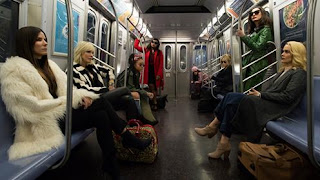 After the return of "Ghostbusters" with an all female cast. It seems timely appropriate to receive an all-female "Ocean's Eleven" remake. Except, this group will apparently only have a group of eight?

The first set photo from the film was released today, and you can find it above. If you look close you can see Sandra Bullock all the way to the left. Bullock will play Debbie Ocean (a clear wordplay on Danny Ocean) who plans to pull off the "heist of the century" with her perfect crew. A crew that includes Cate Blanchett, Rihanna, Mindy Kaling, Awkwafina, Anne Hathaway, Helena Bonham Carter, and Sarah Paulson.

Am I interested? Meh, honestly I don't know yet. I am intrigued by the cast, but I also praised the all-female "Ghostbusters" cast. I thought that movie ended up being wildly mediocre, and before you thinned skinned Americans jump down my throat, please understand that it was completely script issues that made me NOT love that movie, it had nothing to do with the all-female cast. As always, I will await the trailer for "Ocean's Eight" before making the decision of whether or not I am excited to see it. It looks like Steven Soderbergh, who made the original remake with George Clooney and Brad Pitt, helped write the script for this. So maybe I may give this a serious shot.

What do the rest of you think, and your thought on the all-female remake phenomenon?

Posted by Shawn Hoelscher at 10:08 PM