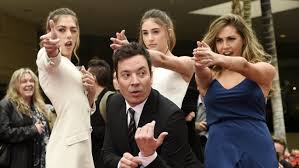 Do any of you guys think its weird that I prefer the Golden Globes to the Oscars? Yeah, sure, the Oscars garner more prestige for the movie actors, and the Emmy's to TV actors. But, I just appreciate the Golden Globes much more. Its not that the winners in movies in TV sync more with my tastes, but because it seems like the Hollywood Foreign Press goes above and beyond in finding the talent in each category and creating the nominees that way. Its not about campaigns, its not about politics, its not about social issues, its about who made the biggest impact in their arena. That's what it should be in all award circuits, but watching The Oscars every year feels more and more like watching a political debate. The Golden Globes feel like an entertainment awards ceremony, which is why I really enjoy watching them.

This year, Jimmy Fallon hosted the 74th annual Golden Globes, and while I kind of liked his opening singing and dancing number, highlighting some of the biggest moments in film and TV from 2016, I have to kind of say that Fallon's hosting was the biggest dud of the night. This is surprising to me, as I have been a huge Jimmy Fallon fan for as long as I can remember, but his comedic timing was just off. His Chris Rock shitick? Fell flat for me. His Trump jokes? Come on, that's all you had? The Jessica Chastain and Eddie Redmayne introduction? Not that funny or creative. It seems to me that Tina Fey and Amy Poehler are the only two people deemed to host the Golden Globes from this point forward, although I did really like Ricky Gervase last year, if he ever wants to come back, he sure can.

If you were to ask me at the start of the week, that I'd prefer Meryl Streep's Cecil B. DeMille award speech over anything Jimmy Fallon contributed to the night, I probably would have laughed in your face. I understand how powerful Meryl Streep is as an actress and as an icon, but to me, she has always been wildly overrated. I was already ready to fast forward through everything she was going to say. But I stuck it out, and you know what it wasn't bad. I figured it would be a massive, self-righteous ass-kissing to herself. But that's not what happened, instead she discussed what its like in Hollywood, why the arts are important and begging for an age of empathy. Yes, she brought Trump into the mix, and you may or may not like that. But in the context of her speech, it was appropriate and I was both fascinated and enthralled and she never talked about herself at all. This is the first time and quite possibly the only time I will ever see Meryl Streep's ego completely out of the equation and it was one of the highlights of the night.

As far as movie award wins go, it was a big, big night for "La La Land." The film won in categories such as Best Actor (Ryan Gosling) and Best Actress (Emma Stone) in a Musical or Comedy. Damian Chazelle, won Best Director and Best Screenplay for "La La Land." Justin Hurwitz won Best Original Score for "La La Land." And of course, it took the big prize of Best Film in Musical or Comedy. Big night for a wonderfully great movie. I also loved that Aaron Taylor-Johnson got the Best Supporting Actor award, very much deserved for his demented performance in "Nocturnal Animals." I was also happy that Viola Davis won for "Fences," a movie I plan to write about sometime this week, great movie, rich in performance and Davis' cements that fact. I was also very much in love with the fact that "Zootopia" was crowned the best animated movie of the year! I also have to congradulate Casey Affleck on his win for Best Actor in a Drama Movie, very, very well deserved. Even though I don't understand why you look like Joaquin Phoenix during his rap career. Probably the biggest surprise of the night was Isabelle Huppert winning Best Actress in a Drama for "Elle." A French film that also took the Best Foreign Film award. Not who I expected to win, but nothing wrong with a little surprise. I now can't wait to discover this film on my own. I also can't wait to watch "Moonlight" for the first time, since it won Best Drama Film, another surprise of the night. I can't wait to see that now!

As far as television goes, it was a big night for the AMC mini-series "The Night Manager," if you missed that mini-series, check it out as soon as possible. Because its exquisite. Tom Hiddelston, Hugh Laurie and Olivia Colman who took Best Actor, Best Supporting Actor and Actress in a mini-series. The Lead Actress award in drama went to Sarah Paulson for her work in "American Crime Story: The People vs. O.J. Simpson" which also had a big night. "American Crime Story: The People vs. O.J. Simpson" also took the prize of Best Mini-Series or TV Film. Masterfully deserved. The year 2016 was a strong year for mini-series events. I placed both "American Crime Story: The People vs. O.J. Simpson" and "The Night Manager" very high on my favorite TV of 2016 list. I would highly recommend both of them. And even though it didn't take home any awards, "The Night Of" is absolutely worth watching. I am really happy for Tracee Ellis Ross for her historic win for "Black-ish," as she took home the award for Best TV Actress in a Musical or Comedy. An African American woman has not won in this category in over 30 years, so that's a big deal. This might shock some people, but I am actually a huge fan of "Black-ish." I also love that "Atlanta" won two Golden Globes. I love that show, one of the best new TV shows of last year, check in on it this Fall!!

Some other highlights of the night included Sylvester Stallone and Carl Weathers, two legends from "Rocky," presenting the award for Best Drama Film. I also had a good laugh over Michael Keaton's "Hidden Fences" mention. What is "Hidden Fences?" Keaton presented the award for Best Actress in a Drama Film. Octavia Spencer was up for her work in "Hidden Figures" and Viola Davis won the award for "Fences." So I guess he blurred the two titles together? Did he do it on accident? Was it the teleprompter? Who knows. I wonder if Amy Schumer and Goldie Hawn's presentation was supposed to be a joke toward Keaton? Or if they were having problems too? Who knows, but it was a good joke there.

What did everyone else think of tonight's Golden Globe ceremony? Did you think the winners deserved to win? What did you guys think?