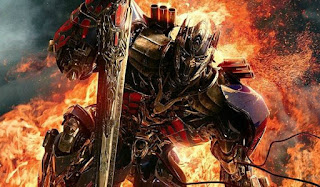 Back in 2007, I actually liked the first "Transformers" film. Sure, it had a few Bayisms thrown in there, but they were kept to a minimum. I never thought Michael Bay would be capable of making a movie without lots of Bayisms. I'm not sure "Transformers" had to be as long as it was, or feature the humor it did for films based on a toy line, but it was still good.

That seems to be the thing that Bay forgot as he made more films in this franchise. That this franchise was based off of a toy line. Nowhere in a franchise like this should we see a grown woman eating pot brownies. Or have an over-abundance of foul language, or have racist undertones, or be over two-and-a-half hours long. Bay went overboard on each of these films and these should have been much more straightforward as stories instead of throwing everything and the kitchen sink at the audience every single time. Bay has always been an odd choice for the director's chair for all of these movies. But his signature is so deep in this franchise that he might as well finish.

"Transformers: The Last Knight" is supposedly the last Michael Bay movie in the franchise, but I don't know if I am holding my breath yet. This could be his bitch forever. I am excited at the prospect of a "Fast and Furious" style movie with Josh Durhamel, Tyrese Gibson and John Turturro starring along side Mark Wahlberg and Stanley Tucci. But easily the most compelling imagery is Optimus Prime attacking Bumblebee. Even not being a huge fan of this franchise in general, that one hurt a little. Will Optimus Prime become Nemesis Prime? We will have to wait and see.

The thing is...can Bay end things on a high note? Can he not overstuff his film with useless scenes that don't forward the plot? Can he make a movie entertaining and fun and not just loud? Let's hope so. Its been tough going out to the theater to see these, so I hope this is a worthwhile adventure.


Posted by Shawn Hoelscher at 7:44 PM