The Mummy Poster and Trailer 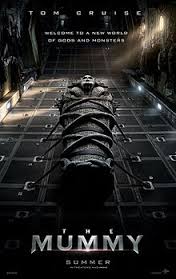 I have got all sorts of thoughts and questions revolving around these movies, its almost making my head spin. I am still wondering if Universal will pull it off. "The Mummy" is the third set of movies set around Mummy lore. There is the 1932 classic. There is the 1999 "Mummy" movie, which I absolutely love. (Hate the sequels, let me add though) And now, this new Mummy movie will spearhead not only a brand new franchise, but an entire cinematic universe.

Not only do we have Tom Cruise playing a marine and the up-and-coming Sofia Boutella playing the Mummy monster. We also have Russell Crowe appearing as Dr. Jekyll, who is no doubt setting up for is stand alone film coming out in the future. If Sofia Boutella is our Mummy, why is Tom Cruise playing just a marine? He's signed a multiple picture deal, Cruise will be in more movies. So there has to be more to his character right? Will we find out that Cruise is none other than Van Helsing? Who knows.

All of this might be blowing your mind, but look at your calendar. April 1st is nowhere near us. This is happening, whether you believe it or not. We are going to get a shared universe involving the Universal monsters. A part of me wants "The Mummy" to break the box office, just so we can see how these plans materialize. Its not like these monsters are like superheroes like with what Marvel and DC are doing. Will all these monsters appear in one movie? What will they be doing if they do? Will it be "Monster Squad" redux? Will they battle Van Helsing? Or maybe Abbott and Costello? Aren't you just a tad bit curious?

The trailer doesn't give us much. Parts of it look like the original Branden Fraser Mummy movies. Though it looks like this trailer is darker than those movies ever were. It looks like this will be creeper. I am fascinated that this shared universe will take place in modern times, though I guess we are dealing with a group that is mostly immortals, so I guess I can buy that. What do you think of all of this?


Posted by Shawn Hoelscher at 7:20 PM