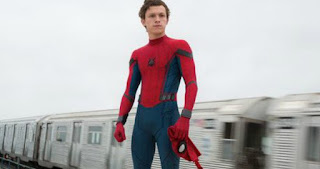 I love that Jimmy Kimmel Live has become a Mecca of all things Marvel movie news. At least as far as the Marvel Cinematic Universe is concerned. I mean, I get it. Disney owns ABC, Disney owns Marvel, put two and two together. I may have to stay up late, but I love getting a good glimpse of what's to come, and in the case of Spider-Man, oh man it was awesome.

I have posted two halves of the trailer for "Spiderman: Homecoming" on my Instagram, Facebook and Twitter pages. Its the shittiest of shit quality, and I am sure you can find a better version on YouTube right now. But I don't care. I was so excited and I had to throw it out there.

"Spiderman: Homecoming" looks great. It looks like Tom Holland is still the perfect Spiderman and Peter Parker. Yes, I still don't throw the P-word around too much, but there is not another actor that embodies everything these two characters represent. It looks like Spiderman's relationship with Tony Stark will be a big plot point in this movie, this is a very Stark-centric trailer. Not that this is necessarily a bad thing. We get one good look at Michael Keaton, and only a couple good looks at Vulture. But I think Vulture looks pretty good. There looks to be a nice blend of humor and drama. It looks like there are going to be a couple shots of Parker in pain, so it may not all be sunshine and rainbows.

This is all shown through the musical charm of MGMT's "Time To Pretend" Nice touch!

Check it out for yourself, in good YouTube quality! 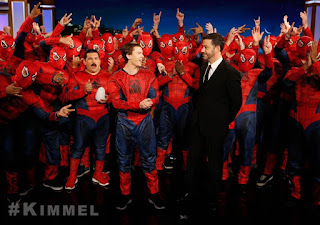 Posted by Shawn Hoelscher at 9:09 PM