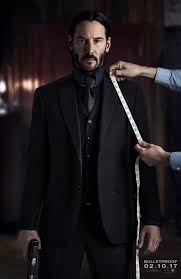 One of the biggest surprises in movies for me within the last few years has been "John Wick." I have always found Keanu Reeves to be a funny actor to watch, simply because he comes off half-asleep in about every movie he's in. But here, somehow he came alive. I am also a sucker for revenge flicks, and if that revenge flick somehow revolves around a dog, well, I am extra invested.

Its not a movie I would have expected to branch into a series of any kind. But I think the movie hit a nerve people weren't expecting. I don't know why John Wick is assembling himself to kick people's asses in this sequel. I don't know if I have the stomach to sit through another brutal dog death, so I hope its in the service of something else. But whatever the case maybe, this looks to be another kick-ass ride. I sincerely hope I am not wrong. I'd love to see a resurgence in the career of Keanu Reeves. When he does work, he sets off fireworks. So I hope this is another winner for his sake.


Posted by Shawn Hoelscher at 2:40 PM