Ghost In the Shell Trailer 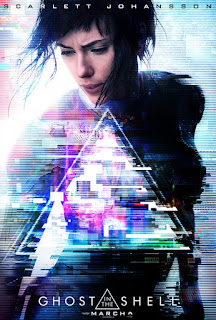 "Ghost In The Shell" is a remake of a 1995 Japanese Anime movie. Its been a long while since I saw the original film, but one thing I DO remember was being taken aback by the masterful animation and the style of the anime. This put Japanese anime on my radar, and for that, I will never forget it.

So of course, in this day in age, we are getting a remake.

This film has already created a whirlwind of controversy with Scarlet Johansson in the main role. Hey Scarlet is all good and dandy, but playing a Japanese character? This is indeed a remake of Japanese anime, so why are next to do characters actually Japanese or even Asian for that matter? White-washed roles strikes again!

With all of that in mind, I honestly don't know what to think or how to feel about this. All of the white actors in this have taken me completely out of the trailer. No matter how many times I try to watch it. There are some stunning visuals and the trailer gets kudos for a splendid use of a Depeche Mode song. But it feels like the movie went completely out of its way to come off unauthentic and that rubs me wrong.

What did you think?


Posted by Shawn Hoelscher at 8:16 PM