Dune coming back to Legendary Pictures 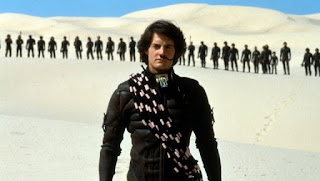 When David Lynch made "Dune" back in the 1980's, movie theaters were given glossary cards so that they could keep up with the film's story and characters. I don't know if that was Lynch's fault or the studios or what, but the film didn't quite translate out onto screen like it should have. The best adaptation of "Dune," as far as I am concerned, is the Syfy mini-series from 2002. I think the reasons are obvious. You need more than one movie to really make something like "Dune" work. Imagine if Peter Jackson merely made one "Lord of the Rings" movie. Imagine all the important and emotional material that would have to get edited out in order to fit that bill? I feel so much was already left out of the movies already. "Dune" is a dense, massive story and it needs the proper amount of time to fully tell the story that needs to be told.

Legendary Pictures got the rights to "Dune" today. Which can only mean a "Dune" adaptation is around the corner. There are no actors or directors or anybody attached to this thing yet. But this could be a very monetary endeavor for Legendary Pictures, or it could lead to catastrophy. It will boil down to who they decide to attach to this thing. Will they get people who enjoyed the book? Who care about the material? Or will it just be another listless cash machine whose soul purpose is to generate revenue? Legendary Pictures has the chance to do something awesome. I hope they do, I hope they do.