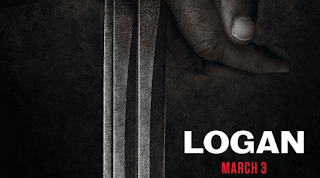 Everything that has a beginning has an end. Sadly, Hugh Jackman's run as Wolverine/Logan is coming to an end. Maybe I am jaded because Wolverine has always been my favorite superhero, but I have liked Logan's run as the character. It's been an impressive road that he will be saying goodbye too, appearing as the character more times than both Sean Connery and Roger Moore played James Bond. So that's some fun trivia you may not know.

Now, many people prophesied that Wolverine 3 would be an adaptation of "Old Man Logan." Which wouldn't work unless Fox made a deal with Marvel for the X-men to appear in the Marvel Cinematic Universe. In the comic "Old Man Logan," Red Skull (Captain America's arch-enemy) gets every seemingly every supervillain in the Marvel Universe  (think Dr. Doom, Magneto, Green Goblin, Abomination, Loki, Dormammu) together and they all gang up on and kill all the superheroes. Cap. Iron Man. Spider-man. Thor. The Fantastic Four. All dead. All that are left are a depressed, remorseful Logan and a blinded Hawkeye. Logan needs money in order to pay rent to the Hulk, who has turned evil, so evil he raped his cousin and began an inbred Hulk family. (Its written by Mark Millar, whose kind of a fucked up guy). Hawkeye has a job and will pay Logan enough money to keep his home for a lifetime. So they drive cross-country across a supervillain dominant America to complete this task.

In this trailer for "Logan," the seemingly final movie about Wolverine, we definitely see a vibe and a style of "Old Man Logan," but this isn't a straight adaptation. It also looks like this sequel will involved X-23, which was a female clone of Logan. How she fits into the plot should be interesting.

The only thing I can't figure out is the grand conundrum of this film is the problem that plagues the entire "X-Men" franchise. Where the hell does this movie fit into the grander scheme of things? At the end of "Days of Future Past," we are led to believe what Professor X told Logan, that mutants will have a brighter future now that they changed the timeline. Yet, in the future, all the mutants are supposedly gone? The "X-Men" franchise is still the most frustrating modern franchise, narrative-wise. But, that doesn't take away from the power this trailer possesses. I am ready for another great "Wolverine" movie.

And the Johnny Cash music? Perfect.