Halloween Week: Scary Stories To Tell In The Dark 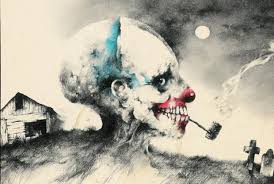 I don't know how many of you are children of the 90's. But one story that comes up in nostalgic conversation is Scary Stories To Tell In The Dark. They were a series of horror-themed short stories written by Alvin Schwartz. Schwartz seems to be an author who wrote these books then seemingly disappeared from reality, but there is no doubt the power of writing and his illustrations. These weren't the illustrations we usually saw in books for children. There was a Tim Burton-ish, almost gothic quality to them. The thing is, they really could scare the shit out of you. At least, if you were in elementary school. I read that the books were re-released later after the 90's and the re-lease featured different illustrations. Apparently, the illustrations from the original writings were deemed "too scary" for children, so the old illustrations were lost.

The stories themselves? Well, some of them were spooky, some were funny, some were designed as cheap thrills for children to have fun with. There were short stories, there were poems and there were even Halloween-style games you could play. At the end of the day, the stories were geared towards kids. For instance, there was a story called "The Big Toe," about a boy who digs up a toe from the soil. The boy shows it to his mother and his mother cooks it for dinner. What kind of boy would not freak out digging up a big toe out of the ground? Better question, why would his mother cook it for dinner? Again, these were kids stories so some of them were kind of weird. (I actually told "The Big Toe" around a camp fire at a rodeo one time, and it delivered big laughs.) No matter what, there was a creepy vibe from each story that was both fun and unbearable as a child.

I bring up this series of short stories, because Guillermo Del Toro has been planning to adapt this set of stories into a film. Its been talked about for a long time now and it seems like production has been on and off for awhile, but due to a recent article, Del Toro maybe moving forward with making the movie. Del Toro has a very specific style of horror filmmaking and it separates him from the rest of the herd. My question is, since these were based on children's books, would they still be scary? When Del Toro sits down to make a horror movie, they are indeed creepy and disturbing, and I wonder if that would show through in the final film. Like I said, the illustrations were creepy! I wonder if the movie would still pack the same punch. If it would be accessible to all ages, because if made a certain way, it would definitely be rated R. I'd love a no-holds-barred, creepy adaptation of this, but I don't know if that would be right for the spirit of these stories.

Posted by Shawn Hoelscher at 7:42 PM