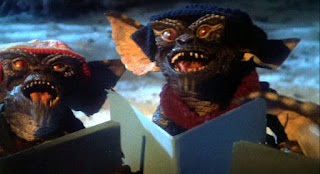 Last night, I watched the World Series game three, then afterwards I was channel surfing. Trying to find something good to watch. I stumbled upon "Krampus," a Christmas-horror-comedy that I have a slight soft spot for. Its a movie I reviewed on this site last year, but its definitely grown on me since then. I think in general I have soft spot for the "Holiday Horror" genre, a genre we don't see too much of, but I really enjoy it when it comes around. I know the holidays are supposed to a loving and tender time of year. But let's face it, its also a time of great stress. On a wide variety of reasons, its a time of great stress and the best of holiday horror films tap into that stress and unleash something we can all relate to.

One good holiday horror film that is also a comedy is "Gremlins." Its interesting to me because "Gremlins" was always meant to be darker than it was. When you sit down to watch "Gremlins," its a lot more kid friendly than you may expect. But I am sure that the designs of the gremlins would freak a lot of children out, I know the commercials for Gremlins creeped me out as a child. The initial film? Well, I always found it to be a fun movie, its a goofy movie with some horrific potential. The sequel, was even goofier than the predecessor, but I have always enjoyed both movies on a primal level. I think depending on how old you are and how much you appreciate this stuff, "Gremlins" would work on you.

Another good Christmas horror film is "Black Christmas," and no I am not talking about the 2007 remake that was just a remake that nobody asked for. I am talking about the film that came out in 1974, a fantastic year of film in general I might add. Its about a sorority house who stay in their house for the holidays only to be meant by a killer. While the remake was of typical modern remake fashion, gore and torture-porn for gore and torture-porn sake, the original was something else. It brought on the dread, it amped up the creep factor and it was something that was genuinely scary. The deaths were pretty unsettling and disturbing, especially the iconic death of a person wrapped in plastic wrap, propped up to be sitting in a chair, looking out the window. Unsettling indeed!

What are your favorite Christmas-horror-films?

Posted by Shawn Hoelscher at 10:55 AM