Halloween Week: Children of the Corn 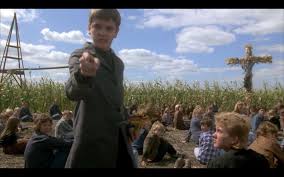 Stephen King is not only my favorite horror writer but one of my favorite writers in general. I love him so much that I can forgive him when he over-explains or goes overboard with all of his narration and description. Which, let's face it, happens in just about every one of his novels. I really have a soft spot for his short stories sometimes over his novels. He gets right down to the nitty-gritty with his short stories and the scares come a lot faster. One of my favorite Stephen King short stories is "Children of the Corn." Yep, you may know that title as a long-winded horror franchise. But it started as a Stephen King short story. A troubled couple is on a road trip to save their marriage, when suddenly they hit a child. Under further inspection, they find out that the boy they hit had his throat slit before getting hit by their car. Who would cut a child's throat and why? The couple see's that the next town coming up is Gatlin, Nebraska. They plan to drive into town and report the crime. When they get to Gatlin, they find the town both dated and deserted, which gives the wife the creeps. They stumble upon a church, which is the only building that doesn't look dated. The husband goes in and finds out that Gatlin is being secretly run by a cult of children who murdered all the adults in the town ten years prior, all due to their believes in a Pagan, corn-loving Jesus!

Creepy children scare me. Creepy religions scare me. So you can probably imagine that "Children of the Corn" creeped the fuck out of me. There is a moment in the story in particular, when the husband finds a portrait of the evil Pagan Christ the children worship and how King describes the painting...well... its something I hope nobody ever draws. I'd have nightmares forever. There is a slow burn to the story that pays off big by the end and even though its a short story, its successfully condensed and contains a great deal of good scares.

I sat down to watch the movie adaptation on Netflix a few weeks ago. I wish I was as enthused about the movie as I am with the short story. "Children of the Corn" the movie is a complete farce. If you are looking for something on Netflix this Halloween to watch and if you want a good scare, don't land on "Children of the Corn." Everything that made the short story special has all but evaporated from the film version's script. First, the couple is having problems, they are just a typical couple we find in horror movies that make dumb decisions because the movie needs them to. There is no sense of urgency to their actions, just mind-numbing stupidity. Peter Horton and Linda Hamilton play the couple and they do what they can, but even the best of acting won't stop you from laughing at the stupid dialogue. Second of all, there is not a single scare in the entire movie. We have so many great examples of freaky children in horror movies over the history of the genre. In this film, they are laughably not scary and completely non-threatening.

The worst part is that "He Who Walks Behind The Rows" is completely butchered as a character or presence. "He Who Walks Behind The Rows" is the name of the Pagan God the children of the corn worship. In the short story, his presence was brief, but you understood why you should fear him and why the children worship him so. The description is completely crazy King. My favorite kind of King. In the movie, well he's apparently a hedge-hog that drives in the ground. The couple kills the God in the stupidest way possible and the character's death scene is unfathomably funny. When you are literally laughing at a hyperventilating pace during a horror movie, that's a bad sign. That freaky portrait of evil Christ I describe above? We never see it! That image alone, if done right, could have conjured the worst of nightmares. But this movie ignored it completely!

Stephen King is the master of suspense, and this adaptation gives that nickname ill-will. I would skip this film completely. Its completely incomprehensible and doesn't scare a single minute in its run time. How this became a series, I will never know.

I hope to write one of these each day leading up to Halloween, I am going to try to find something I like for tomorrow. Thanks!

Posted by Shawn Hoelscher at 9:22 PM