Guardians of the Galaxy Vol. 2 Trailer 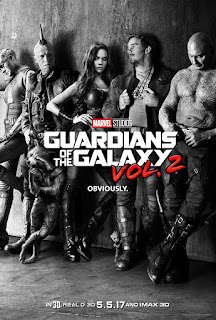 "Guardians of the Galaxy" was a major surprise in 2014. Everybody was expecting it to bomb that summer. But when you bet against Marvel and Disney, it makes an ass out of you and me.

I love "Guaridans of the Galaxy," I continue to love the movie. This sequel to that film is one of my most anticipated films coming out next year and May can't get here soon enough.


Usually, when Marvel releases a trailer, it focuses on certain battles, we see people in action, characters we have grown to love. While there is some action in this short trailer, I love that the biggest highlight of the trailer is Drax the Destroyer and Star-Lord talking about dancing. Dancing. These are some of the best realized characters in the entire Marvel Universe, and this should bring them to a whole new level.

And baby Groot? How cute. Looking spiffy in his miniature jacket.
Posted by Shawn Hoelscher at 8:20 PM