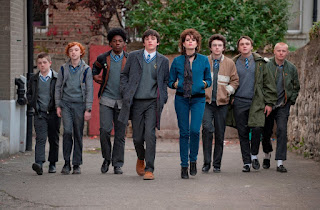 I don't know if I have mentioned this before, but I love 1980's music. I love most older music in general, but I love just about everything from the world of 1980's music. There was something special to the culture and inspirations that came from that decade of music. I think its special because it was the first decade of music videos. Maybe its because, for better or for worse, it brought technology to the music world. Whatever the case, it helped change the music scene forever.

"Sing Street" is set in 1985 and takes place in Ireland. There is a family that is having personal and financial problems. The father of the family Patriarch Lalor (Aiden Gillen) is having trouble with his business and has to take his youngest son out of private school and into a catholic but state school. Its a very strict school and the boy Conor (Ferdia Walsh-Peelo) has trouble fitting in. He loves the world of music and there are several songs and bands that have a huge influence on him. So he decides to start a band, naming it after his school Synge Street, but calling the band Sing Street. Not only does he get a band together, but he gets somebody to school and help make music videos. Conor is doing all of this also to win the heart of an older girl at school, named Raphina (Lucy Boynton).

The film works like a Irish John Hughes movie. Conor is our Anthony Michael Hall-type who has a comedic yet dysfunctional home life. He is going after a woman he doesn't exactly like him back and he's best friends with all the rejects of his class. Somehow he is able to discover to go after his biggest dreams and that he is the true commander of himself. Does he get the girl? Well, I don't want to tell you that.

"Sing Street" is the best original musical in a long time. There is so much original music in the film, and its all excellent. Not just good, not just great, but excellent. The film in a way feels like a time machine into the 1980's, because the music feels authentic. Its also great that Ferdia Walsh-Peelo is a stand-out lead. The film is filled to the brim with wonderful actors, not one performance really standing above the other. This is just a remarkable ensemble.

If you've got a particular eye for John Hughes or a particular ear for 1980's music, check out "Sing Street." You will very much enjoy yourself.

FINAL GRADE: A
Posted by Shawn Hoelscher at 8:34 PM