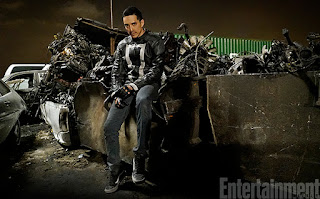 Whether you believe it or not, "Agents of S.H.I.E.L.D." is set in the Marvel Cinematic Universe. I get that there is a level of frustration that comes with that realization. The entire Marvel Cinematic Universe seems disjointed between its movie and television departments. ABC's "Agents of S.H.I.E.L.D." seems to only get the leftovers of the Marvel movies. Plus, the movies also do not seem to be connected to the Marvel shows on Netflix. Clark Gregg who plays Phil Coulson on "Agents of S.H.I.E.L.D." has expressed interest in showing up on a Netflix show. But because all Netflix shows are shot back-to-back-to-back-to-back, its hard to fit a character in where they shoot episodes in a less accelerated capacity. Plus, Kevin Fiege, the braintrust of Marvel Entertainment has some bad blood with the Marvel TV division.

It could be awhile before we see the movie and TV characters meet on screen somewhere.

With all of that said, that doesn't mean we can't get excited for what is in store for the next season of "Agents of S.H.I.E.L.D." even if an Avenger doesn't show up on the show. This season, we will get Ghost Rider. Sadly, its not the version of the character named Johnny Blaze, whom Nicolas Cage played in his movies. Gabriel Luna (who previously starred in HBO's "True Detective"), will play a character named Ronnie Reyes, a different Ghost Rider in the Marvel Universe.

Will this Ghost Rider be Inhuman? I certainly hope not. There is an entire mythology to the Ghost Riders that I hope gets explored in some capacity on the show. It would be too easy and too cheap to just simply make him an Inhuman. I kind of hope that this fourth season goes in an entirely different direction. There has been a little too much going on with the Inhumans. Having Daisy Johnson on the run will be enough Inhuman fun for the whole season.

To wet your appetite even more, check out this found footage style introduction to the character.


Let's hope for a good season!