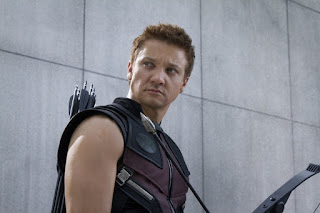 I watched the Presidential debate tonight. I am pretty blown away that what we laid eyes on counts as a debate. Its doesn't help that I feel like I did not get anything out of that sorry excuse for a "debate." I can't believe that is what our campaigning has become. Belittle the other person to death and listen to two adults bark at each other, not really answering any questions we may have. Don't they know that a high percentage of people don't know who to vote for?

Last election, one thing article I came across as I was watching Barack Obama win his second term as President was which side of the political spectrum our superheroes landed on. If superheroes were real, who would they vote for? It was an amusing article. Seems fitting that around the first debate this time around, "Avengers" and "Avengers: Age of Ultron" director Joss Whedon gave his two cents on which Avenger he could see being President of the United States. His pick might just surprise you.

Joss Whedon has been busy recently, taking to Facebook for his "Save The Day" campaign he's launched. Whedon has been working with a slew of A-List stars to inspire people to vote in the upcoming election, particularly the younger generation. I think this is a wonderful initiative, and I sincerely hope he finds success in it. But anyway, he was busy with his new initiative over the weekend, answering questions on Facebook about voting when an interesting question found its way to him. Someone asked which Avenger Whedon thought should be President. This is what the Avengers director had to say about it.

"I’m probably going to have to go with Hawkeye. There’s a man who is grounded. He not only has family values, he has an actual family. He actually interacts with human people in a normal way. He has children he wants to protect. Every other Avenger? Let’s face it. They’re a little out there. A little bit disconnected from the real world."
Read more at http://www.hitfix.com/harpy/joss-whedon-makes-a-strong-argument-for-hawkeye-as-president#lhaZHECFBeCdAKVH.99"

I could see how Whedon would arrive at that answer. There are not too many superheroes in the history of comics who are just people with skills. Most superheroes have a superpower of some kind, which does disconnect them from the real world. Clint Barton isn't disconnected from the real world. He's a real person, with a real family. Perhaps that would give him a leg up in the debating scenes against the likes of Thor Odinson or Tony Stark.

I think Steve Rogers would be the best President, but that's just me.

Posted by Shawn Hoelscher at 8:20 PM