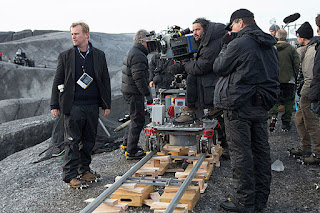 He's easily one of the very best directors working in modern blockbusters today.

Yes, I can understand if someone finds his work a little self-indulgent. I also get that not everything he makes turns to gold. Believe me, I have problems with "The Dark Knight Rises" and "Interstellar," but unless  your name is Quentin Tarantino (and even his resume isn't squeaky clean), you don't have a perfect filmography. We are human beings, and human beings are destined to fail. I find unique about Nolan is that even in his successes and failures, he is constantly pushing himself as a filmmaker. He is also constantly remaining ambitious in a business that has fallen to brands, models and formulas. His next film will focus on the Battle of Dunkirk, which took place during World War II on May 26th to June 4 1940. It was fought between the Nazi's and the alliance of Canadian and European powers (France, England, Poland, Netherlands and Belgium).The battle kind of evolved into a rescue mission. That is what the film will focus on.

The teaser trailer for "Dunkirk" doesn't really show us much, but one thing I love about Christopher Nolan advertising is he doesn't give away anything in his trailers. You never have a commercial that gives away the entire movie if you work for Christopher Nolan. It's short, but its definitely sweet and right to the point. The film will star Nolan regular Tom Hardy as well as Mark Rylance, who recently won the Best Supporting Actor Oscar earlier this year for his work in "Bridge of Spies."


Posted by Shawn Hoelscher at 8:09 PM