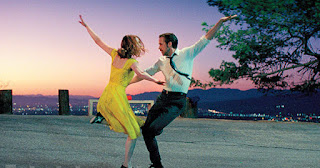 One film from 2014 that I didn't end up seeing that year, but was compelled to catch up with was Damian Chazelle's "Whiplash." I am so glad that I did end up doubling back for it, because its an astounding motion picture. Miles Teller and especially J.K. Simmons are magnificent and its pretty clear in Simmons case why he won a supporting actor Oscar the year after.

Damian Chazelle's new film this year, entitled "La La Land" just shot to the top of my most anticipated for the winter movie season.

"La La Land" is set to be a romance musical starring Ryan Gosling and Emma Stone. I think the duo is a wonderful pair. We have already seen them together in "Crazy, Stupid Love" and "Gangster Squad" and they seem to share a very unique chemistry with each other. The film will also see Chazelle reteam with J.K. Simmons. There is a hypnotic glow to the film that I find captivating and the songs feel personal and not so showy as we see in general musicals.

We will see "La La Land" released sometime in December.


Posted by Shawn Hoelscher at 7:29 PM