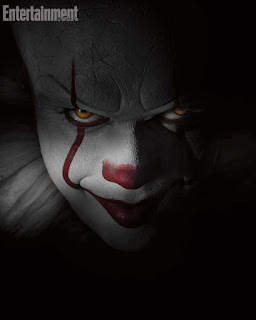 Bill Skarsgaard as Pennywise The Dancing Clown, everybody.

The summer before sixth grade was an interesting one for me. I had just watched the mini-series of Stephen King's "It." I was so moved by it at the time that I immediately bought and cracked open the book, all the while I was moving from one neighborhood to the other. When I first watched that old mini-series, I was pretty petrified of Tim Curry and he was the king of my nightmares for a few years. But after I finished the book, I found out that Curry's Pennywise was nowhere near as horrifying as he should have been and if the script was better, Curry would have been even more horrifying.

We have our first official look at Bill Skarsgaard as Pennywise, and after a couple false-starts, we finally have a movie adaptation of "It" coming. What do I think of the photo? Well, Bill looks creepy enough. He looks like Pennywise is supposed to look and he certainly looks like a menacing, sadistic clown. I think people should check out "Hemlock Grove," on Netflix. Its not one of the better Netflix Originals, but I think it utilizes Bill as an actor well. I think he maybe a good choice for this role, he can certainly make himself look creepy in clown make-up.

But here is the main thing I am hoping for from this adaptation. Pennywise was always more than just a scary clown. Pennywise, wasn't even a scary clown, his name wasn't even Pennywise. He's a being from another dimension who feeds on humans, he chose the skin of a clown because it lures children in better, and what better way to feast on your prey but go after the most innocent, easy target. Pennywise was sweet and innocent in points of Stephen King's novel, then when it knew it had a guaranteed meal, it turned up the scares. Because this being also felt that fearful people tasted better. If done right, this won't be another movie about a creepy clown. It will just be creepy. I am hoping for more than anything adapt this material the right way, because they'll make it even scarier than before.

I have my doubts because Cary Fukunaga was full steam ahead literally a year ago with his own "IT" remake and the studio tore it down because it wasn't the conventional horror movie. Fukunaga's movie was to be a "slow burn" and a "gradual build-up." But apparently that isn't good enough for Warner Bros. I am scared that this studio will burn this great opportunity to make something truly scary, all for some quick cash and cheap thrills. I pray to God I am wrong, because in the right hands with the right script, "It" could force nightmares for generations.

I am curious to see a trailer now, how about you?

Posted by Shawn Hoelscher at 9:37 PM