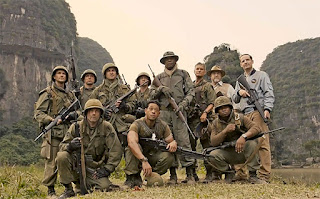 One of the movies for next year that is definitely on my to-watch list is "Kong: Skull Island." We are going to start seeing a major franchise that brings King Kong and Godzilla into the same film. In the right hands, that will be a huge fun extravaganza. I think the arrival of "Godzilla" in 2014 set the stage for how right this project could potentially be and now "Kong: Skull Island" is looking to be a winner.

Much like the original trailers for the 2014 "Godzilla" movie, this looks to be a creepy thriller over anything else. It seems like Samuel L. Jackson will be bring a huge host of charisma like he usually does and he's going to play the hell off of John Goodman. It looks like Brie Larson and Tom Hiddleston will be doing equally excellent work here. But, good God, this looks like the biggest King Kong we've ever had in a movie! Holy Bananas he's big!


Posted by Shawn Hoelscher at 9:02 PM