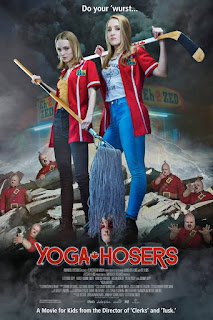 I've had a love-hate relationship with Kevin Smith. I've liked most of his movies, but when they get away from them, its usually due to laziness. Smith feels like a one-trick pony at times, just doing the same obnoxious routine each year. Something changed in him around 2011, he made "Red State" and "Tusk," two movies that felt very experimental compared to the rest of Smith's filmography. This is a very different Smith from what we are used to, and I think that's a good thing. His new film, "Yoga Hosers," looks outrageously goofy. It looks like a mixture of all of Smith's strengths, as well as the newer mold he's creating for himself. The film stars Kevin Smith's daughter and Johnny Depp's daughter playing as the same characters they played in "Tusk," which I am excited for.

Plus, any excuse to see Johnny Depp playing Guy La Pointe is fun for me.


Posted by Shawn Hoelscher at 7:23 PM