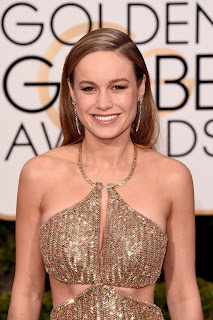 At this point, the future of the Marvel Cinematic Universe has already got their actors planned. We know Benedict Cumberbatch will play Doctor Strange this year. We've already been introduced to Black Panther and Spider-man. The next big hero that we haven't met yet and is still awaiting their movie in a couple years is Captain Marvel, AKA Carol Danvers. We are very soon going to have our first major superhero movie with a woman in a lead role and its been a long time coming. Marvel needs the perfect actress to portray the character.

But make no mistake, it has not been confirmed yet, but we do know that Brie Larson the front runner to play the superhero. If this frontrunning choice becomes a fruition, you won't see me complain. Larson is an absolutely amazing actress. She deserved her Acadeny Award for "Room" last year. But she was also equally amazing in "Short Term 12," "Don Jon," "21 Jump Street," "Scott Pilgrim vs. The World," "The Gambler," and "The Spectacular Now." I have had my eye on her for awhile and I knew she'd be destined for great things. If she does get the role, it will be in excellent hands.

What do you guys think? Should Larson get the role? I say yes!