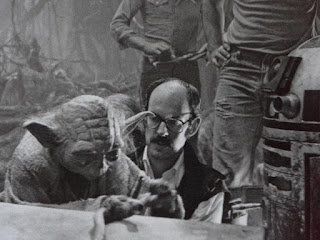 One of my favorite things in all of "Star Wars" canon has been Yoda. I think there are so many people out there that would agree. I love the character, and I absolutely love how Frank Oz brought him to life. We know that since the character met his fate in "Return of the Jedi" that he wouldn't be seen in any of these new episodes.

It has been reported that Frank Oz was at the Pinewood Studio recently, apparently doing work on "Star Wars: Episode VIII"

So what does this mean?

I mean, maybe Frank Oz is going to do voice work on a different character, but I somehow doubt it. Would he be willing to do it if he wasn't bringing Yoda to life? Would he be up to being there for a wink and a nod? Maybe. I am not sure. But at the end of "Return of the Jedi," we do see Luke Skywalker seeing Yoda as a Force Ghost. Could Yoda be returning to Episode VIII as a Force Ghost. I think it could be pretty cool. I feel Luke will be a much more prominent character in the eighth episode of this saga.

Frank Oz seemed to make it clear that he was "pretty sure" that he was doing voice work for Yoda in the eighth movie. So maybe we are getting a Force Ghost Yoda in Episode VIII, maybe we might even get a flashback of some kind. Who knows, all I know is that I'd love to see the character in some capacity.

Posted by Shawn Hoelscher at 9:46 AM