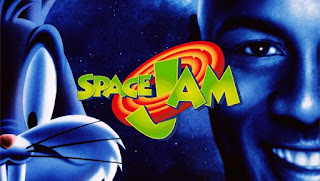 I watched "Space Jam" quite a bit when I was seven years old. I thought it was the coolest thing in the world. I grew up on a healthy diet of Looney Tunes cartoons. I loved Bugs Bunny and the whole gang. I also thought Michael Jordan was the coolest guy to ever walk the Earth and everybody's MJ craze was full force in 1996. Then, there was Bill Murray, even for as young as I was, Bill Murray was a big part of my life. Due mainly because of "Ghostbusters." So I had Looney Tunes, Michael Jordan and Bill Murray all in one outstanding movie. They were playing basketball against aliens. In the mind of a first grader, what was cooler?

Now, I am sure I am going break several people's hearts when I say this, but its a movie that hasn't held up over time. I have re-watched lots of movies that I was obsessed with in my youth, some stayed in my heart, others faded. "Space Jam" is one of those movies that faded for me. Its a crazy, schizophrenic movie. Now that I am older, I figured out that it was a good thing Michael Jordan didn't turn to an acting career, because he did a poor job of leading a movie. Also, what is with a "Pulp Fiction" reference kids wouldn't understand?

So I don't have the same nostalgic love for that film as many people my age do, but I understand the fandom is still alive and well for it. Who would have thought we would get a sequel to it ten years later. But last year it was reported that Lebron James would headline a sequel to the film. Today, Justin Lin was confirmed to direct the film.

This is interesting news. Justin Lin did very good work on the "Fast and Furious" films he directed. So at least this sequel will be good to look at. But do we need a sequel to a movie just because its huge fan base grew up? I have a feeling it won't have the same impact. In the 1990's, Michael Jordan WAS the NBA. Lebron James just doesn't have the same appeal as Jordan did, and I don't care if you disagree with me. It is what it is. But, I guess the jokes on me. James was actually surprisingly good in "Trainwreck," and easily my favorite part of that horrible movie. So perhaps he will have a better time carrying a movie than Jordan did.

I guess I am just kind of saddened that I am living through such an unimaginative era of filmmaking. Brands run every aspect of the business, and the ambitious projects that take chances are only found in the arthouse market. Is this the new Hollywood trend now? Just make a sequel to something that was immensely popular in the 1990's? Because the hipsters need a nostalgia check too?

Who knows. Sorry to be a Debbie downer. But what does everyone else think?