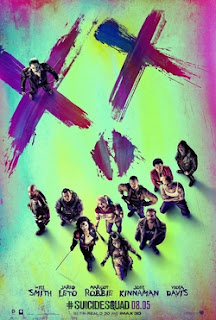 Okay Warner Brothers, you have one more chance this year to make me care about your DC Extended Universe.

But honestly, I think David Ayer will be a little bit more successful in his efforts. At least I hope so, I have loved every bit of marketing for "Suicide Squad" so far. This trailer is no different. Not only do we get more great shots of Margot Robbie as Harley Quinn. I got to say, if "Suicide Squad" becomes a hit this August, Margot Robbie will become a full-fledged movie star. Here's to hoping that happens, because it looks like Robbie's Harley Quinn is one of those moments where the character magically walked out of the comic books. We will possibly look back and say Margot Robbie was born to play the role, like Robert Downey Jr. to Iron Man or Mickey Rourke to Marv.

I loved that the trailer pushed some of the other characters to the forefront this trailer. Like Jai Courtney's Captain Boomerange, or Jay Hernandez's El Diablo. I also liked Will Smith in this trailer, I like him more and more as the trailers come out. What I thought would be the lowest point of the movie could be one of the highlights.

I think it could end up being a stroke of genius introducing the new Joker in a non-Batman film. I am glad Leto didn't merely impersonate what Heath Ledger did. Just as Ledger didn't impersonate what Jack Nicholson did. This is going to be a rendition of the Clown Prince of Crime that will belong totally to Leto, and I can't wait to see it.

On the other hand, I have a lot of questions. Especially since the bad taste left from "Batman vs. Superman: Dawn of Justice" is still in my mouth. So Batman kills in this universe without thinking twice, so why is The Joker even alive? The Wikipedia page for "Batman vs. Superman" said that Batman operated for two decades before retiring. So that would explain all the colorful supervillains in this movie. But when you actually sit down to watch "Batman vs. Superman" there is no evidence of those two decades of Batman fighting crime. He seems just as new as Superman. Which means "Suicide Squad" makes zero sense as a movie.

You can ridicule the Marvel model all you want, and I have personally wondered how much creative freedom directors making Marvel movies have when they connect to the greater MCU. But one thing about Kevin Feige is that his movies flow better. DC is trying something different, their directors aren't comparing notes when they make the DC movies. So the tones and styles are very different from each other. That will either be a home run or a huge mistake by the time "Justice League" comes out, because I am having a hard time imagining Leto's Joker sharing a scene with Eisenberg's Lex Luthor.

But hey, we are getting ahead of ourselves. Let's just hope this one sticks the landing. It certainly looks like it will.


Posted by Shawn Hoelscher at 9:52 PM