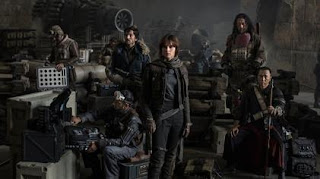 But I know just as many people who felt that it was nothing more than a remake of "A New Hope." While I kind of understand that mentality, I would respectfully disagree. I bring this up, because I would be hard-pressed to see if anybody can find the inspiration for "Rogue One: A Star Wars Story." The first of three anthology movies that will come out each year we don't get another main episode in the "Star Wars" saga.

I have been looking forward to these anthology movies the most. Because, its exciting to me to briefly step away from the Skywalker Family. Its going to be cool to explore other stories in this universe, to discover new storylines, to expand the universe in ways that the main saga really can't. Its going to be really cool to see something where the sky is literally the limit. Telling from the first trailer, it looks like the filmmakers are diving head first into that mentality. We know "Rogue One" will take place sometime between "Revenge of the Sith" and "A New Hope." But really that's it, and I have to say I was floored by what I saw.

This barely feels like a normal "Star Wars" movie, and I love that. This feels a little more urgent and a little more adult. Although, I wouldn't call this a "dark" movie, just something that feels isolated from the other "Star Wars" fair. Also, who is that actress playing Mon Mothma? Because it literally looks like somebody went back in time and recruited Caroline Blakiston to play the character again, even though that's impossible.

December is  going to be an exciting month of each year for the foreseeable future, and I hope this movie rocks our socks as much as we anticipate!


Posted by Shawn Hoelscher at 7:04 PM