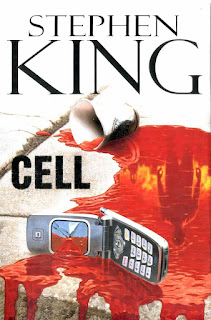 I have been a huge Stephen King fan all of my life. I have also loved zombies all my life. So when I was in high school, and I caught wind that King has written up his own take on the zombie story, I positively couldn't wait to get my hands on it. Especially, with a set up so juicy. The cell phone craze was present around 2006, but they weren't the devices we know today. But even back then, there was no question as to how attached to them people were. Stephen King's Cell told the story of one day, a pulse getting released to all cell phone lines all across the world. With the result that turned its users into mindless killers. Sure, that may sound silly, but there is lots of silliness in the horror genre when you really pull things apart. The zombie genre has always dealt in metaphor, and looking back at it now, its amazing the story King set-up and even what he predicted. Now more than ever, we are slaves to our cell phones. We feel naked without them. (I myself accidentally left my cell phone at home from work today, and I couldn't bare how incomplete I felt without it.) We can do so much with them now, and some people have their entire lives on their phones. We are, in a way, being controlled by them. Being zombiefied by them.

When I reflect on reading that book, I remember a great set-up. I remember an excellent and quick opening that grabbed the readers. King likes to ramble, especially when he should be throwing us into the story, but Cell was different, and I loved it for it. Sadly, the rambling began later in the book, and one of the things King has always had trouble with is sticking the landing. The ending to Cell was pretty disappointing, and I learned that I wasn't alone in that thinking.

Its taken years and years for "Cell" to be adapted into a movie, but its been a plan for awhile. A decade ago, horror filmmaker Eli Roth was attached to make the movie, but the film fell into development hell for years. The movie "Cell" was finally made in 2013, but it is getting released this year.

The film will star John Cusack, Samuel L. Jackson (both of whom worked together on another King adaptation, "1408") and Isabelle Furhman. The film will be directed by Tod Williams. It looks like King himself worked on the screenplay, trying to create a better ending than he wrote for the book. That piece intrigues me a lot, and I think I am little excited about the potential big differences between book and movie. The thing is, 2013 was a few years ago. I have read that Cusack and King himself were forced out of the movie. Its taken a long time for this to finally get on its feet. What was the problem? What took so long after the movie was filmed? These all feel like red flags, I hope I am wrong. But I am not holding my breath, because the good King adaptation are far and in between.


Posted by Shawn Hoelscher at 8:55 PM