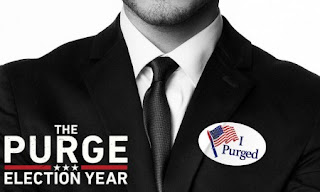 "The Purge" turning into a franchise is something I would have never expected. Especially after the first "Purge" movie. That was so awful that I couldn't believe I had wasted time on it and it seemed like one of those horror movies that would be one and done. But it made a lot of money that summer, and a sequel was quickly planned.

"The Purge: Anarchy" is a movie I liked quite a bit more, simply because writer and director James DeMonaco almost completely embraced his concept. It isn't a perfect movie, but the more I watch it on HBO, the more I can enjoy it on a silly level. I wrote in my review of the first film that the concept is interesting, but one that gives you headache if you think about it too much. I can't see a one-nigh-a-year crimefest play out like it has in the movies so far, and the plot-holes revolving around these movies is at a head-scratching level. But this sequel was at least fun.

Last night, I watched the trailer for "The Purge: Election Year," the third installment of this very strange franchise. I am wondering if James DeMonaco realized that he just shot himself in the foot. It looks like this movie is all about preventing the death of a United States Senator who is trying to be elected president so she can outlaw The Purge. That is all fine and dandy for a movie, but its been made clear that government officials are off limits for Purges. Can somebody explain what a level 10 government official is, because I am trying to wrap my head around this thing.

The rest of the trailer looks like a mixture of the first two movies, and I don't know if that is going to equal a good movie or not.

But back to this "kill the senator" storyline. How can it work? Who are level 10 government officials? Will we find out that the New Founding Fathers are corrupt? Who knows, it just seems that after a tremendous leap forward with "Anarchy," we are taking an equally tremendous leap backward. Plus, can we stop making trailers that give away nearly all the movie? That would be nice.

See you on the Fourth of July for "Election Year!"


Posted by Shawn Hoelscher at 9:51 PM