My Reaction to the 88th Academy Awards 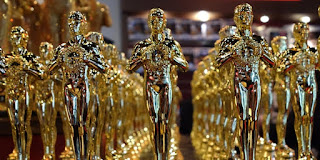 Man, I did horrible with my predictions this year.

And I didn't know Joe Biden and Lady Gaga were best friends.

And I figured Stacey Dash wouldn't have shown her face in Hollywood after all the colorful things she's said in public the past month.

There is no denying it, this years Oscar ceremony was one for the books, for both good and bad reasons. There was quite a lot to like about this years ceremony, and some stuff that I feel they got wrong. It was definitely a colorful ceremony, full of gags that were dead on and others that fell completely flat.

I will say that overall Chris Rock did a good job as host and thank God he didn't skip this because of all the controversy that has spiraled around the ceremony. Chris Rock's opening monologue was dead on. This is exactly what I was trying to say last month when I weighed in on the OscarsSoWhite controversy. The problem isn't the Oscars, they are simply a reflection of the movie talent of each year. The real problem lies in Hollywood. Hollywood is not giving the black performers in the industry the opportunities to really muster and showcase their talent. Thank you Chris, thank you very much for saying it. Thank you for all your jabs at the Smith family and all their snootiness over the past month. I have to say all the race stuff got a little out of hand as the ceremony wore on. The black actors invading the movies up for Oscars this year was mediocre. But that skit where Chris Rock goes to Michigan was bad, and I do mean BAD. I get that he was trying to make a point, but sometimes the point can go south. There it went south. Overall, he was a good host.

I saw lots of people on social media not like "Mad Max: Fury Road" taking all the technical awards this year. But my God, I would ask those people if they actually saw the movie. "Mad Max: Fury Road" was a technical wonder. The movie is a fever dream somehow brought to life. There were things George Miller did in that movie that I still have a hard time seeing how he pulled off. Its an amazing experience and I get a sugar rush of a high every single time I watch it at home. It deserved everything it got tonight, and I was on cloud nine as the presenters kept calling the movie onto the stage.

I made my predictions right here earlier today. This is the first time in a long time that I scored under twenty categories. I guess that's a testament of just how strong a year 2015 really was. Sort of. I've discussed many times on this blog that the Academy is full of baggage and bias. Of course a movie about the end of child rape in the religious institutions would win best picture. Anything that has a strong social issue wins the big awards and this year was no different. I messed up on the short film categories, but every year I do. I never get a chance to see those so that isn't a surprise. But "Ex Machina" winning best Visual Effects? Man, nobody saw that coming. I can't stand the worst Bond song ever won the Best Song award, man that was surprising. Especially since Lady Gaga gave a surprising performance for a movie about rape on college campuses.

I am glad Leonardo DiCaprio finally won, I knew this would be his year and I am glad it was. Man he is a good public speaker and he delivered some of the very best speeches I have heard from anyone in any award season. So good for him. I am not all surprised by the rest of the night. Everybody knew it would ring out as it did. I am so glad about the big wins for "Mad Max." I am happy for Leo and Brie and Alicia. I am glad that "Hateful Eight" got the score. I am glade for Emmanuel Lubezski. I still can't believe "Cartel Land" didn't win best documentary, but oh well.

I can't wait to see the changes to the Academy and how that will effect history in the upcoming years. I am excited to see how the Academy changes in the face of this controversy. I only hope that people don't just get nominated simply based on their skin color. The Academy doesn't really have to change. Hollywood needs to give its black performers better opportunities, that's the real problem and I want you all to spread awareness of that fact, not simply boycott an awards show because of its representation of the year. The Academy doesn't make the movies, Hollywood does. Next year, I will have to be a little bit more mindful of my picks. Boy, there were a lot of upsets this year, winners I just did not see coming. Good for them though.

Now everybody is off to their parties, and this whole train starts again tomorrow. Can't wait to see what the rest of this year brings and how the nominations will shake out next year. But please, next year, no Stacey Dash.

Posted by Shawn Hoelscher at 9:12 PM