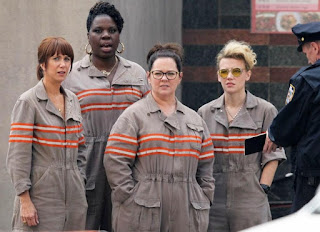 Today on my Facebook page, I said how much I liked that the studio making the remake of "Ghostbusters" decided to release their trailer announcement on the exact date they predicted the end of days. There is a scene in "Ghostbusters 2" when Dr. Pete Venkmen (Bill Murray) starts his own show and one of his guests says that Armageddon will be on February, 14th 2016. A comment to which Venkmen looks at the camera and says "Valentine's Day. Bummer"
I am looking forward to this remake. I haven't read any backlash to this all-girl, all-star cast and I hope I don't. Yes, its a progressive choice, but the casting is so good that I think it will work. I am getting sick and tired of living in a era where everybody gets offended by everything. Besides, Bill Murray seems more than onboard for this. Given his history during and after the franchise, I would say that this is something significant. If Murray is excited, then I am excited too. The only thing I will say is that I wish it wasn't a remake. If they kept this in the original "Ghostbusters" storyline, I'd be jumping through hoola-hoops right now.
This announcement isn't much at all. It just shows that the people behind the movie hired lots of extras for some kind of scene. We see no Ghostbusters in action. No ghosts. No Hemsworth. No Garcia or Walsh or Williams or Dinklage. So if you haven't seen it yet don't get too excited. Especially since we have to wait until March to finally see the trailer. That is a bit of a tease, but I think I can patiently wait.
God, March is going to be so cool!
Posted by Shawn Hoelscher at 7:23 PM