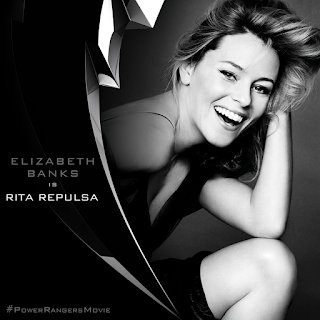 Well here is some major casting for the upcoming Power Rangers reboot coming in 2017.

Its pretty clear from the casting so far that Banks will be joining several unknowns for this venture. But that doesn't mean she'll do bad or that the cast will do bad, just a mere observation. One thing I will say is that I was a little surprised by the casting earlier today. I thought about it all day today at work and I found myself dumbfounded. Elizabeth Banks is talented, no question about it. But a villain? I just couldn't see it. I tried all day, but I just couldn't see it.

A friend of mine made a good point today, Elizabeth Banks is REALLY good at being hammy and if the script requires her to really ramp up the ham, then I think she'll do great. She has proven herself dominant in blockbusters. She has proven herself to go all out in make-up and costuming (take a look at Hunger Games.) and like I said she is talented. The thing I wonder about is how tone will play into the movie. If this is in the spirit of the television show and the tone is bright, broad and playful, she's a perfect match. If the movie has any intention of being like the short film Joseph Kahn made last year that was instantly taken off the internet due to Kahn not having the proper licensing, then I can't see Banks being successful. I can't picture Banks being a serious villain and I hope this movie isn't trying to sustain a serious vibe. That I think will kill the experience for me. It seems we are slowly turning away from the mentality that "dark and gritty equals good" and I couldn't be happier. Yes, taking the dark road isn't always a bad idea. But simply taking the dark road with treasured iconography for the sake of it seems lazy and misinformed. I mean, sheesh, look at how successful Marvel has been with their connected film universe for not being serious.

That's the thing though, if I had one major complaint about the MCU, is that its a little too playful at times. And I am certainly not alone in that observation. I don't think "Avengers: Age of Ultron" was the movie the trailers said it was going to be and I believe that was mainly due to Marvel being owned by Disney. The Marvel movies are always going to have that shiny standard they have to live by, because their owner says so, and that might hurt movies like "Captain America: Civil War," because honestly, how can you have a cutie, gumball version of a mostly somber Marvel story?

But in the case of "Power Rangers," if  they are able to create a light-hearted and fun tone, it will do well. Sure, they can add in some dramatic flair, just as long as everything is balanced. That's the big the movie needs or any movie needs to be successful, balance. Being able to sort out your themes and tones properly and it seems harder than it should be. The casting is coming together nicely for this reboot and I can only hope for the best.

Posted by Shawn Hoelscher at 9:11 PM