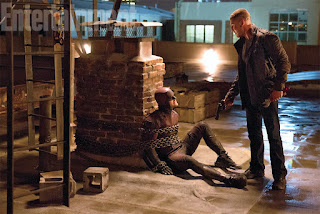 I fell in absolutely insane love with the first season of "Daredevil." A really strong start to the Netflix Marvel shows. Something that blew the movie away by miles, maybe even lifetimes. It was a testament that Marvel is trying really hard with all of their properties, and doing a good job of creating this huge, connected world. It was announced early on that we would get a second season, and I could not wait to lay eyes on it.

Learning that they were adding The Punisher to this season, and that freaking Jon Bernthal was going to play the Punisher, and I was on cloud nine. When they also announced that we will also see Elektra this season, and all bets were off. I didn't just want to see this second season, I needed it.

The trailer for the second season of "Daredevil" was released today, and its everything I hoped for and more. Jon Bernthal's Punisher is brought front and freaking center. Its pretty clear that the season's big story arc will be the conflict between Daredevil and Punisher. Punisher isn't Fisk, nor is he Daredevil. He wants to do right in the world, but instead of beating up criminals and letting the authorities take them, he offs them. Both Daredevils and Punishers philosophies will certainly clash this season, and it seems Bernthal is absolutely perfectly cast.

There weren't any moments of Elektra, but I am glad they didn't put all their eggs in one basket.

I love that this season will be coming out on March 18, instead of April. Since my birthday is March 17th, this is quite possibly the best late birthday present I could ask for.


Posted by Shawn Hoelscher at 7:47 PM