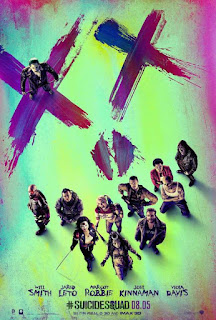 Yeah, whoever thought that DC wouldn't make it for being too serious compared to Marvel shouldn't have anything to worry about. I found little pockets of humor in the latest "Batman vs. Superman: Dawn of Justice" trailer. And this new "Suicide Squad" trailer? Not to be taken seriously at all.

It doesn't matter if there is humor or not, Warner Bros. is creating a different identity and style with their movies, and that's pretty clear in this trailer. While its pretty damn exciting to see the DC universe come to life, its in a totally different style compared to Marvel. This franchise will have its own life, its own mood, its own themes, it will not just be a redux of what Marvel is doing. Honestly, its the best decision they could have made.

Whats cool about this trailer? Basically everything. Leto is going to be one hell of a Joker, mark my words. And Margot Robbie has become Harley Quinn. No, she doesn't play her well, she is her. Like RDJ to Iron Man and Mickey Rourke to Marv, she was born for this role. I think Will Smith will be charmingly awesome as Deadshot and Jai Courtney is a pleasant surprise. This movie looks like it will be a relentless action extravaganza and I can't wait. I am interested to see how DC pulls off dropping the audience in the middle of this universe, instead of going the origin route like Marvel did. Will they be able to get the audience to buy into this world that already has a rough history? I will be interested to see how they do it.

I can't wait to start seeing these superhero movies, 2016 needs to go hyper-speed.
Posted by Shawn Hoelscher at 8:51 PM