If I could compare 2015's movie slate to one thing, it would be a roller coaster.

This was a weird year where it felt like there were so many surprises as their were disappointments. An actor would appear in garbage, then a few months later star in something awesome. The overall tone of the year shifted at will, and there was no telling what the outcome would be. There were moments where I claimed to myself that this would be the worst year of film in awhile, then other months I'd declare it the best. Bottom line, if you could pick and choose the good stuff from the horse-shit, then you probably had a good year of film. If you only knew the horse-shit, then it was probably a pretty cruddy year for you.

Doesn't lessen my top ten one bit. In fact, in a year like this, these movies probably matter more than just a year where we are spoiled rotten by greatness.

It seems like the movies on this list made because the filmmakers chose to go absolutely nowhere else except outside the box. The movies that matter the most to me took "just" out of their vocabularies and made films that felt original, that felt urgent, that felt true and sincere. These are ten movies that really tried to separate themselves from the rest of herd, not taking familiar as an answer. Ironically enough, most of the films on this list (and even some in the ten Runner Up's list) had to do with survival of some kind. Its always interesting when lots of films in one year take up on particular theme, this years them was survival.

As always, I call this list my top ten movies of the year, not the "best" or the "most worthy of awards attention." I am not going to try to tell you that if you had a different opinion than me that you are wrong, I only offer up the ten films I think I'll rewatch the most in the future, movies I treasured the hardest as the year went by. That alone is the greatest compliment I can grant a film, and these movies deserved it for that matter. 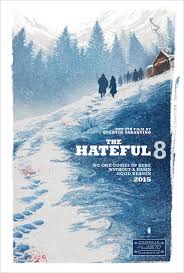 I will have the full review for this within the next couple of days. What I will share for you now is that just when you think Quentin Tarantino has grown his ego too big, and just when you think he's going to fail an idea, he turns right around and completely rewrites the rules of cinema. People walking in expecting more of the same a la "Django Unchained" will be sorely disappointed. Tarantino isn't slumming it when it comes to the Western genre, and if there is one genre he absorbs like a sponge, it that one. This movie is nothing like "Django" in all the best possible ways. I'd love for Broadway to pick this up for it to become a popular stage play, because it could. Tarantino old and new have never been better, and the addition of both Jennifer Jason Leigh and Bruce Dern adds a magical piece to an already beautiful puzzle, and bloody indeed. 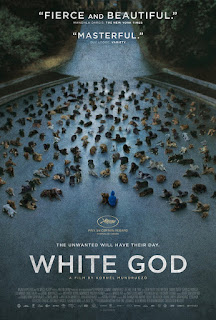 To simply call "White God" the dog version of "Dawn of the Planet of the Apes" would be taking away all of the merits it earned. I watched this movie quite a bit over the summer, and I realized that its just as much about the humans as it is the dogs. The film is a parallel character study between animal and girl about the anxieties and determination for those we care about. It also beautifully shows us how caring for something so much can force you to lose yourself to mania and macabre. Its also quite bracing that absolutely no special effects were used and some 200 real dogs were used in the movie. It also can't be ignored that the dogs become actual characters, full of meaning and emotion for having no dialogue of any kind. While "White God" has its dark parts (the dog fight training scene is particularly grim stretch of the film) it does so in the spirit of good storytelling. 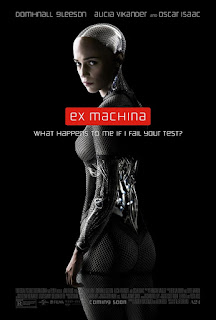 You may have enjoyed the villainous glee of Domhall Gleeson and the gruff heroics of Oscar Issac earlier last month in the new "Star Wars" movie and if you enjoyed those actors you owe it to yourself to check them out here. "Ex Machina" is a different kind of robot movie, a different kind of Frankenstein monster and completely unlike anything that has come out all year. As good as Gleeson and Issac are, the true star is Alicia Vikander who plays Ava, the human-like robot that was invented in the movie. Her journey throughout the film is shattering character-wise, and her character is an amazing mix of real life and special effects, just showing how far the latter has come over the years. 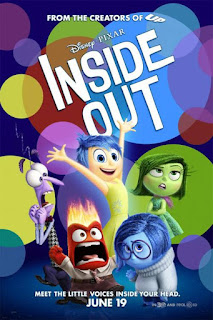 There were a couple of years recently where it felt like Pixar had completely sold out. That it would never get its shit back together and it had decided to just turn out the general fluff most animated studios churn out every year. It felt like they lost everything that made them unique and special. Well, that was totally proven wrong this year with "Inside Out." A testament that Pixar hasn't lost any of their old bag of tricks. A reminder that Pixar still has the power to evoke relenting and demanding emotions from their audience, no matter how old they are. It is also a brilliant showcase of their mesmerizing animation and the attention to detail, both onscreen and on the script, make this movie impossible to ignore. 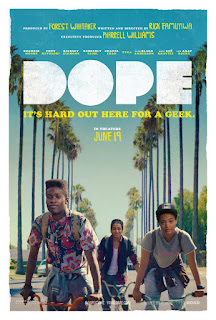 Possibly the only film on this list that has the most bizarre storyline, but "Dope" is a true delight. A bashful look at the everyday contradictions that drive us all, how we relate to friendships, how we relate to relationships, how we relate to strangers, how we love people and how we hate people. Its a brilliant ride from start to finish, created by a cast of newcomers that hopefully become stars in the near future. 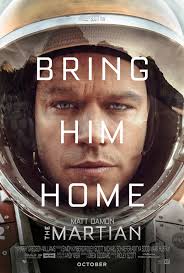 I can't believe how shamelessly ignored "The Martian" has been on most end-of-the-year lists that I have read so far. "The Martian" is all-encompassing. It has one of the best casts of the year tearing up their roles. It has a look at outer space brought up beautifully by the most cutting-edge of special effects. But the secret weapon? The movie is able to muster huge tension and drama by just being scientific, and lead by the ultra-charismatic Matt Damon, its even better. Its really hard to make science appeal to the general person, and "The Martian" makes that look effortless. It shows us the impossible and it shows us truth. Like I said, all-encompassing. 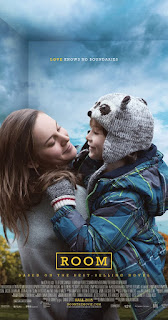 Brie Larson is absolutely incredible in this piercing drama of living in such a small space for so many years. And on top of it, raising a child a world that seems so small. How do you convince a child that there is a bigger world out there after so much confinement in a small world? And once you reach that big world, how long will it take them to miss that little world? "Room" is a painful experience that aims for the jugular, but it is also engaging, enthralling and even humorous at times. And the chemistry between Larson and Jacob Tremblay is undeniable. 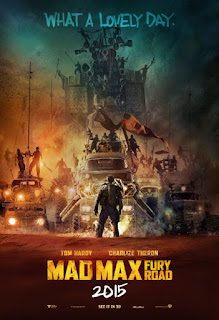 Its been awhile since director George Miller last took us to the Wasteland, and would have been a gimmicky cash cow, ended up becoming the most gleefully visceral experience to be had at a theater this year. What I love most here is that Miller completely deconstructed the formula for action movies. Too many times in the past and so much so that it has become a norm, movies will spoon feed its audience the plot, just to make sure they can keep up. Action movies will feature moments of excitement, followed by explanation for why we are there, then more moments of excitement followed by explanation for why we are there. Rinse. Repeat. Miller had faith in his audience, and whats unique is that the story unfolds slowly, and we experience in the same fashion that Max does. I also love that the film is full of badass women instead of mere damsels in distress. And the action chase scenes? Magic.

In speaking of Tom Hardy... 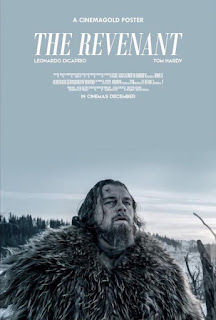 I can't see an Oscar ceremony in the remote future where Leonardo DiCaprio DOESN'T win for his unforgettable work in "The Revenant." As I stated in my review, I give director Alejandro G. Inarritu huge credit for making two sensational movies back-to-back. Not an easy task, almost impossible and anybody expecting anything like "Birdman" should that expectation at the door. Leo completely becomes Hugh Glass, the fur-trapper who was abandoned by his colleague after they murder his son and his surviving odyssey across the cold wilderness for retribution is scorching and harrowing, and we the audience feel every bit of it. Hardy isn't channeling Bane for his villainous character this time out, and it seems like Hardy completely redefines himself with every new role he takes on. DiCaprio and Hardy are awesome together, and if there was an Oscar for best duo, they'd win this year, bar none. 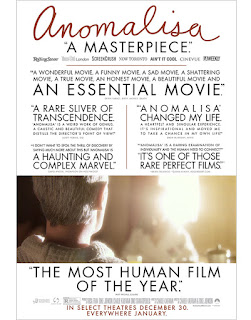 Just a few days ago, this movie appeared and punched me right in the heart. As I have seen once more before making this list, its power as cinema has only grown to higher heights in my mind. Now, I can't wait to get it on DVD, to pull it apart and really dissect what certain scenes mean and how it benefits the movie as a whole. The work done by David Thewlis, Jennifer Jason Leigh and especially Tom Noonan is all complex and incredible voice work. The attention to detail in the claymation is on another level of animation completely. But what really draws you into this special film is just how these clay figures looking like humans...actually become overly human. It feels like something that couldn't be mimicked by the very best of actors, and it feels like a fever dream. A masterpiece created by our true master of emotion, Charlie Kaufman. Days after, I still feel drunk off of my experience with this movie, and I know that feeling will grow in the years to come. This is the one movie from 2015, that I know I will watch the most.

I will have the Runner Ups available sometime tomorrow. What were your favorites of the year gone by?
Posted by Shawn Hoelscher at 10:50 PM