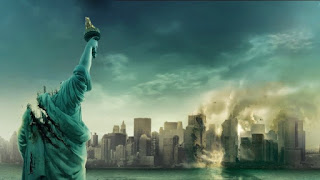 What is "10 Cloverfield Lane?"

I remember seeing "Transformers" in 2007 and watching this mysterious trailer for a movie that would become "Cloverfield." The trailer in front of "Transformers" was unnamed when released, which made the experience even more invigorating. The idea of showing some intriguing shots, without giving away the entire premise of the movie, then don't give us a title for that movie? I don't think that I had ever been done before, but feel free to fact check me.

If there is anybody who loves to play the "mystery marketing" game, its J.J. Abrams. There was a world of excitement circling who Benedict Cumberbatch would be playing in "Stark Trek Into Darkness." Abrams made trailers for a novel he was involved in and didn't name those trailers either. Yeah, trailers for a novel. And the novel itself, S. isn't an ordinary novel either. No matter what he does, Abrams doesn't like to put all of his eggs in one basket. He loves to watch his fans squirm. In a day and age where stuff for movies gets spoiled months in advance, its refreshing that somebody who still treats movie marketing as a magic trick.

Some people on YouTube are calling "10 Cloverfield Lane" a sequel to "Cloverfield." Which makes sense, but watching the trailer, I wonder if it is a direct sequel. I mean the found footage device has been abandoned. We have actors we recognize in this trailer, like Mary Elizabeth Winstead and John Goodman. Its being described as a "spiritual sequel." What could that possibly mean? I am betting that this is a movie that takes place in the "Cloverfield" universe. I am thinking it will be a completely separated incident but whatever it is, it is connected to what happened in New York City in 2008. It looks like John Goodman is keeping a monster in his house, there is no way a Clovie could fit in a basement. Right?

J.J. Abrams wouldn't tease a movie is connected to "Cloverfield" then we go to the theater is March and its completely unrelated, right? Since its J.J. Abrans we are talking about, I don't put anything past him.

All I know is that I enjoyed "Cloverfield" more than I thought I would in 2008. I have discussed fan theories for sequels to it in the years to follow. I love that we are getting some kind of follow-up, whether its a sequel or something else set in the "Cloverfield" universe. We won't know much for now, but the good news is we only have to wait until March. What are your thoughts and theories on this?


Posted by Shawn Hoelscher at 6:48 AM