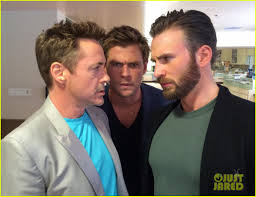 I don't watch any late night TV, usually because I am too busy watching movies and writing for this blog that I love. I was going treat this Tuesday night like every other Tuesday night. Then something on Facebook caught my eye. I belong to an awesome Marvel Cinematic Universe group on Facebook, and I love chatting with Marvel fans worldwide about this massive franchise that I really get a kick out of. I was scrolling through all my friends lives when a notification came up from this MCU group, stating that Robert Downey Jr. and Chris Evans were going to be on Jimmy Kimmel Live tonight, and that they had a "surprise" regarding "Captain America: Civil War."

No matter what, no matter how late I had to stay awake, I was going to see whatever this surprise was. Could it be a trailer? Could it be a clip? Could it be a glimpse of Spider-Man or Baron Zemo or whomever Martin Freeman was playing? Who knew? But I had to find out. I read the description of the Cap 3 trailer that premiered at D23 this summer, so if it were to be a trailer, I thought I had a pretty good idea of what to expect. But as we all know, seeing something for yourself is always better than reading something somebody wrote on a computer.

When Robert Downey Jr. and Chris Evans show up on the show, they are their normal humorous selves. They crack jokes and really get the audience excited for what's coming. First, Kimmel asks them about shooting the third movie in Atlanta and what its like for RDJ to take a more backseat role in a Marvel movie. These guys look like the best of friends and they look like they are just having a ball. They have completely become these characters at this point, and they know how much these characters mean to the fans. They have fully embraced what they have been hired to do and they feed off of our love.

After a commercial break, Kimmel quit the tap-dancing, and he got right to business. What was this surprise? RDJ was sitting the closest to Kimmel, apparently called Seat A and he presented the first official poster for "Captain America: Civil War." Its a pretty cool poster of the faces of Cap and Iron Man facing each other with the tagline "Divided We Fall" on the top. Its not what we expected, but I like whatever they can give me. Suddenly, Kimmel asked something along the lines was "I think the people want more."

Then Evans said "I have a surprise too, but I think I need to sit in Seat A" The whole crowd laughed, and the actors quickly switched places. Then after several moments of Kimmel banter, Evans presented the teaser trailer for "Captain America: Civil War." Yep, I said it.

The teaser opens with the scene that we saw at the end of the credits for "Ant-Man." Captain America is trying to get his old friend Bucky to remember him, and it seems Bucky does. It seems like Bucky is a wanted man, and now that Bucky remembers who he is, Cap is going to try to protect him.

There was an internet rumor that the Civil War in the movies would break-out when Iron Man found out that Bucky killed Stark's parents, while Cap knows Bucky is a victim. Seeing from this trailer, it looks like that quasi-might be true. There is a lot of talk between Black Widow and Cap in the trailer about Cap not pursuing his crusade to help Bucky. "Why?" Cap asks "Will you arrest me?"

But General Ross (William Hurt) shows up and delivers a new act to Cap, so it also looks like we will see some sort of Superhuman Registration Act in this movie. While I don't think we will see the true Superhuman Registration Act from the comics, we are definitely going to get a version of it and that's how Iron Man will come at odds with Captain America. "I want to punch you in your perfect teeth!" Iron Man says.

There is no glimpse of Crossbones or Martin Freeman or Baron Zemo or Spider-Man. We do see Black Panther on the run from Cap in a scene. We see one team of superheroes charging against another. We see Iron Man sitting on the floor next to War Machine's body. We see Falcon flying around in action. There is no sign of Ant-Man anywhere either, nor Vision. But we do see Black Widow in action. Easily, my favorite scene was Bucky and Cap together taking on Iron Man in a fight, chills! I taped the teaser and I will be studying it for several upcoming months!!!!

Kimmel also interviewed Krysten Ritter who played Jessica Jones, the new character introduced on Netflix, whose show also takes place in the MCU. I didn't have the time over the busy weekend to binge-watch all of "Jessica Jones" but I am on episode 9/13 and I am trying tirelessly to crank out the entire series. Once I have, I will have an entire season review ready for you to read. So if you've finished the first season on Netflix, keep your traps shut around me for the time being!

If you missed tonight's episode of Jimmy Kimmel Live, you can see the full trailer for "Captain America: Civil War" on the Jimmy Kimmel website, or you can email me and I will send you the "bootlegged" copy I made.

What did everyone else think????

******UPDATE: Below you can find the full trailer for "Captain America:Civil War" which hit the internet moments after the Jimmy Kimmel Show!


Posted by Shawn Hoelscher at 9:34 PM