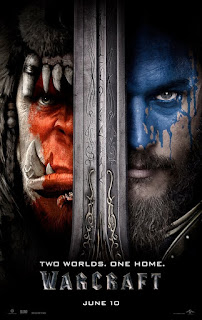 I knew lots of people who did, and the world certainly surrounded me in my formative years, but I never played the game. I love the "South Park" parody, and it seemed very cool when people talked about it. I just never got around to playing the game. I always got the general gist of things though. I know there are two factions, one called The Alliance and the other called The Horde. I knew The Alliance consisted of humans, dwarves and other typical good races among fantasy fiction. The Horde had the Orcs, and other beastly races. For reasons beyond my knowledge, the two factions were at war with each other. Pretty basic outline for a video game, but it always looked fun and one can't deny how popular the game has been over the years.

Despite never playing the game, I am actually excited for the movie. And after that first trailer, my interest has grown even more. Could this be the most rousing video game adaptation yet?

The film will be directed by Duncan Jones, who made the incredible "Moon" back in 2009 and the equally incredible "Source Code" in 2011. He is a rising voice in science fiction, and he knows how to create memorable characters. Telling from the trailer, he has really embraced the style of the video game, which should satisfy hardcore fans. He has also put together a pretty decent cast. Travis Fimmel is absolutely electrifying on History's "Vikings" and having lead the charge in a movie is something he's been leading up to for awhile. He'll be accompanied by Paula Patton, Ben Foster, Dominic Cooper and Tobey Kebbell.

So far, the trailer looks like fun and I am sold. What do the hardcore WOW fans have to say about this?