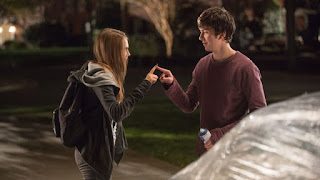 If you loved someone, what would you do for them. Almost every answer everybody would say is "anything and everything," at least all the good couples would say that. But honestly, is everything everything? Especially when you are in high school and you class and parents and a billion different other things going on in your life? Would you ditch school for a couple of days to find a girl, how would your parents think about that, even as you try to maintain you're 4.0 GPA? Would you convince your best friends to go with you? Would you break into an abandoned building for clues to find them? Would you take your mothers car without asking?

"Paper Towns" is a movie based on a novel by John Green. It revolves around Quentin (Nat Wolffe) and Margo (Cara Delevingne). These two have been friends since they were young teenagers. But as they grew up, they grew apart. Even though they live across the street from each other. In high school, they barely saw each other, but that doesn't mean Quentin didn't have strong feelings for her. Feelings he's never acted upon. As the end of their senior year approaches, will Quentin make his move? Well, one night he didn't have to think about it, because Margo steps into his bedroom window, asking to borrow his car. Quentin is hesitant at first, but he gives the car and goes with her. They go around the town, pranking everyone who has wronged Margo in the last few weeks; the boyfriend who cheated on her, the best friend who didn't help her, her "fake" friends, they all get pranked and bad. There is a real connection between Quentin and Margo, the strongest he's ever felt in a long time. So strong he stopped thinking about school or how late it was on a school night and was only responding to the now.

The next day, Margo is nowhere at school, and this happens for three days straight. Where did Margo go? The police come and question Quentin and he polite and responsive, but he's no help. Margo didn't tell him where he was going or what she was planning, and Quentin is left smitten. Until he notices clues; on Margo's window, in his door, other places. He finds a map, a map Margo created to let him know where she is. Does Margo want Quentin to follow her? Does she love him? Quentin certainly loves her, and he's willing to jip school for a couple days and drive from Orlando, Florida to New York to find her. He enlists the help of his best friends Ben (Austin Abrams), Marcus (Justice Smith), Margo's ex-best friend Lacey (Halston Sage) and Marcus' girlfriend Angela (Jaz Sinclair).

"Paper Towns" is a movie about finding yourself. Its a movie about celebrating being a free-spirit. Not that I find anything wrong with that. It feels very much in the vein of "Superbad" and "Dazed and Confused," although "Paper Towns" is never that raunchy. Its a great highlight of time when your young, you're following your heart, and you are doing something for you, not worrying or caring about school or what your parents will say. I think something like this has happened to all of us, and I think the cast and crew of this film paint a great portrait of those feelings and needs and create a good-looking movie.

Nat Wolffe steers the whole movie, and he's great as a kid hung-up on a girl. If you have ever tried to get a girl you knew was out of your league, you will have no problem identifying with Nat's Quentin. Its a wonderful performance, and he leads the charge well. Cara Delevingne is equally as great as Margo. I am now much more excited for "Suicide Squad" in 2016, because I can't wait to see what she does as the Enchantress. The real highlight in the movie is by Austin Abrams and Justice Smith, these are some great examples of best friends on screen, and they should be proud of the relationship they create with Quentin. The three of them bounce off of each other with ease, and all deliver in every scene.

The thing is, "Paper Towns" begins and ends specifically how I thought it would. While I like the acting and the execution, it feels like a movie I have seen several times. The slice of life high school movie that ends not how the characters expect it to. Sure, its better than something like "I Love You, Beth Cooper" but there wasn't much I found fresh. I don't know if the book is the same thing, but "Paper Towns" was so extraordinarily straight forward that I wouldn't be surprised if it lost some audience members.

No matter, I felt it to be a good movie, a sincere movie, something that offers a genuine experience. Plus, the great acting by this young cast makes it all a better journey than it had to be. "Paper Towns" is a great free-spirit movie. A great young, wild and free movie and its also something you can watch with your parents and not feel awkward. This isn't overly sexual or wildly inappropriate, which makes it feel fresh. There is lots to like about "Paper Towns" and it features something for everyone, which is a great compliment for a movie.