Disney and Marvel have big plans for the future of their shared universe, that I can guarantee you. The introduction of Black Panther, Dr. Strange and Captain Marvel is going to blow everyone's mind, that I can equally guarantee you. Marvel got everybody to love and embrace Ant-Man, one of the silliest of silly superheroes in their whole stable, and they did it without seemingly breaking a sweat. So I can already tell that the other newbies Marvel is planning on introducing is going to go over just fine. This is what happens when you slowly nurture a franchise, people will give you money without too much bargaining. Why not? While I love some movies in the MCU more than others, I think taken as a whole Disney and Marvel have done alright for themselves. You can disagree with me if you'd like, but while I didn't fall over in love with "Iron Man 3" or "Avengers: Age of Ultron," they aren't bad movies, and they aren't horrible movies. I think there are several people out there that blow the little things out of proportion because we don't like to see too much success. Its completely human to make mistakes, and I think Marvel has made some mistakes, just not the kind that derails a franchise.

So we got some new heroes on the way, then this past winter Marvel got the right to share Spider-Man with Sony, and we will see Spidey flying around the Marvel Cinematic Universe. People are also saying that there is too much Spider-Man in Hollywood. Okay. Fair enough. But that's not Disney or Marvel's fault. Its not their fault Sony wanted to keep a property they clearly didn't understand just so they could keep making easy money. Let's just sit back and watch Marvel handle it, and we will finally relive the glory days of when Sam Raimi was in charge of the character. With the sudden arrival of Spider-Man into the MCU, some of their Phase Three plans shifted a bit. Well, today the plans shifted again. It seems Marvel has some more tricks up their sleeve, and they are planning movies until 2020! Yep, 2020.

Here is a look at the new schedule: 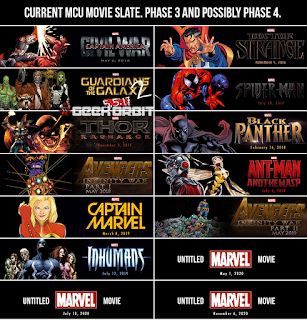 So if we look at this new schedule, we see "Black Panther" got moved back up a bit, which I think is awesome. Then everything looks just about the same, except for July 6th 2018. It seems "Ant-Man" did better than expected, and a sequel entitled "Ant-Man as The Wasp" will be released on that date. That's great, I don't mind seeing more Ant-Man or The Wasp. I had a great time with the movie over the summer and I was curious to see the future of these new additions to the universe. Then in 2020, we will get three untitled films that year.

What could they be?

Well the easiest guess could be "Guardians of the Galaxy Vol. 3." Some more easy guesses could be "Black Panther 2," "Doctor Strange 2," "Captain Marvel 2," or another Spider-Man movie. Its also kind of unclear if 2020 will mark the beginning of Phase 4 or not, we will have to wait and see. If those three movies aren't sequels, then I'd kill to finally get a Namor The Sub-Mariner movie released. I mean, there wasn't a S.H.I.E.L.D. icon in the middle of the Atlantic Ocean in "Iron Man 2" for no reason, right? Namor out there somewhere, right? I'd also shit a brick if Marvel got really crazy and made a "NextWave" movie. Which would be a crazy mix of Spy movie, shoot em up and supernatural movie. I don't know if Marvel would have the guts to make a crazy, R-rated, balls-to-the-wall action movie, but I'd certainly love it if they did.

After today, I am glad that the MCU will have a future into the next decade. I was uncertain as Kevin Fiege is constantly reminding us that "Infinity War" is going to be a "big culmination" of everything he's done since 2008. But the stories will go after the defeat of Thanos, and that is an encouraging thought. For right now, its going to be a fun four-five years of guessing what those three mystery movies will be in 2020. Let's hope Marvel keeps knocking them out of the park. I can say with pride that for the next five years, they will keep taking my money.

That's a wildly ambitious budget, and I hope it works out for the best.