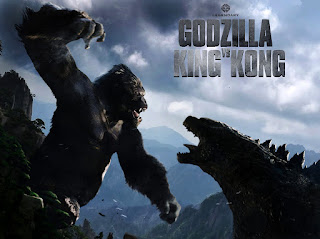 After the success of "Godzilla" in 2014, the wheels have been turning in Hollywood. There is a plan to bring lots of big budget monster madness to the silver screens. At first, it all just seemed like a fever dream, a big rumor that was never going to happen. But then it was announced that a King Kong movie was coming, it was going to be called "Kong: Skull Island." We didn't know much other than that.

A bomb was dropped the other day, and it has been confirmed that "Kong: Skull Island" in 2017, "Godzilla 2" in 2018 and "Godzilla vs. King Kong" in 2020. Yep, the two most iconic monsters are coming and they are going to face off against each other.

I am now much more interested in "Kong: Skull Island" than I was. It is getting a great cast so far, and it might set up for Kong's big showdown a few years later. Hollywood seems to be obsessed with world building in their franchises now, and I bet that will be no different with setting up Godzilla and King Kong. I am very curious now how "Kong: Skull Island" will play out. I liked "Godzilla" in 2014, much better then that piece of crap from 1998, so this is extra exciting for me.

What do the rest of you think?