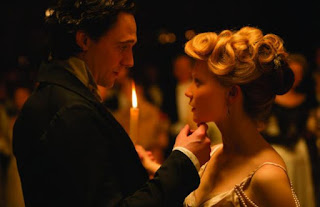 I have been a big fan of Guillermo del Toro for quite sometime now. Over the  years of my del Toro fandom, I have noticed something; there are two sides to Guillermo del Toro. I think Guillermo del Toro has a spectacle side, as he's one of the most reliable directors of the big, popcorn films. Watch the "Hellboy" movies, watch "Pacific Rim," they are wonderfully exciting, epic in scale, but there was always a storyline there that drew the audience in. The other side of del Toro always delved into the strange and the spooky. I think "The Devil's Backbone" is one of the great recent horror films nobody saw. I also think "Don't Be Afraid of the Dark" was big fun, but may only be remembered as having the best teaser trailer in history of horror. Even though I wouldn't consider "Pan's Labyrinth" a horror film, it certainly has some moods and themes that kind of creep me out, and its totally Guillermo, through and through.

There are times when the two clashing personalities of Guillermo intersect, and the last time that happened, it was 2002. I think "Blade 2" is big time fun, but when I saw for the first time, there were parts that definitely made me jump. I was captivated by a movie that had good horror parts, but also had the fun of a comic book movie, and the epic feel of a blockbuster. After all of these years, I am still drunk on "Blade 2" and I was hoping to have that same unquenchable feeling for "Crimson Peak."

"Crimson Peak" has the epic feel of a blockbuster, a talented ensemble of terrific actors doing terrific acting, and it attempts to mash the scary and the massive together into one movie. The genius of Guillerimo's work is the story that draws the audience in, and I think he does that again with "Crimson Peak." It is a very well-written movie, and given that Guillermo has Tom Hiddleston, Mia Wasikowska, Jessica Chastain and Charlie Hunnan to work with, makes it even better. Plus, Guillermo is making a gothic-style haunted house movie, which is right up my alley in terms of taste. Especially since the movie has a impeccably crafted old school feeling to it. There is certainly a lot to like about "Crimson Peak."

On the flip side there are couple instances that fall flat to me. What surprised me the most was that those instances were the moments that were meant to be scary.

The movie opens with Edith Cushing (Wasikowska) in a white dress, outside in the snow, covered in blood. She is talking about seeing ghosts and assuring us that they are real. We then move backward a couple of years and see that Edith is struggling writer, but his father is a successful business man so she is able to live in comfort until her big break. She feels unfulfilled though, and that changes the moment she meets Sir Thomas Sharpe (Hiddleston). They instantly fall in love, but Edith's father doesn't approve. That all changes after the sudden death of Edith's father, Sharpe and Cushing eventually marry and move back to England, Sharpe's home and live in his gothic mansion with his sister (Chastain).

There is something very off about Sharpe's gothic mansion, and there is something off about Sharpe's sister. Guillermo really ramps up the mood and atmosphere, and there is a tidal wave of surprises at the end of the movie. But the worst thing "Crimson Peak" did was advertise as a horror movie. Because its not much of one. The film's first have is very much a gothic romance movie, and Hiddleston and Wasikowska do excellent work to draw us in and get us to care about them. But when Edith starts seeing ghosts, those are the moments of utmost disappointment.

Look, I love it that Guillermo tried to tackle the gothic romance and gothic horror genres. It is a dash of unique in this found footage landscape that is ruining the horror genre currently. But ambition can only take you so far, the ghost scenes fall flat due to the overuse of CGI. There are several close-ups on the ghosts in the movie, and you can see the seams on each one. Sure, there are some good scenes, one in particular involving an invisible body that was the film's highlight, but it was so artificial that it was a letdown. Worst of all, the ghosts felt like an afterthought. Guillermo could make a director's cut and completely remove the ghost aspect of the movie, and it wouldn't hurt the film one bit. In fact, I believe it would have been stronger overall. There is a great story for a human nature horror movie that works better than a supernatural horror movie.

Guillermo del Toro is way too talented to make a boring movie, and that's saying something because the first half takes its time to get things set up. We become very invested in the characters in that time, which makes "Crimson Peak" not a wash. There is a lot to like in this, I just wish that the ghosts were treated with just as much energy as everything else around them.