Beasts of No Nation Review

Beasts of No Nation Review 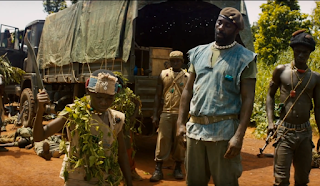 The future of film is upon us, thanks again to Netflix.

Its amazing to imagine that this service that began as rented movies showing up in your mailbox turned into so much more. You can stream countless amounts of movies and television shows right at your fingertips with a Netflix account. Netflix also got creative and began to produce their own original programming. It started with a couple of television shows, then moved into the documentary realm, some of which were nominated for awards. Tonight, Netflix shakes things up yet again. Tonight, Netflix distributed their first film production. While this movie is playing at some theaters, you are really going to have to work for it to find it at a venue. Your best bet is on your internet browser of choice, and this is something you are going to want to see right away, because "Beasts of No Nation" is a mesmerizing, breath-taking experience.

The film follows Agu (Abraham Attah), a young boy living in an unnamed African nation at the height of a civil war. When his village is on the eve of getting attacked, his mother flees with his younger sister, leaving him, his brother and father in the village to protect their home and stores. When the government attacks them, Agu watches his father and brother die, and he flees his village. He spends a few days on his own, until he is picked up by rebels, lead by a fierce Commandant (Idris Elba). The Commandant takes Agu under his wing, and trains him to be yet another child soldier in his army against the government, with his father and brother dead, Agu agrees to follow The Commandant's orders.

"Beasts of No Nation" is a harrowing nightmare. The use of child soldiers is nothing new in the African continent, so something like really hits home with power. It is a well-written, well-acted piece of cinema and if Netflix markets this right, "Beasts" could be a heavy-hitter in this years's Oscar race. Idris Elba could be the first black actor this decade to walk away with the Lead Actor statue. Yep, I am not even kidding here. Idris Elba has done remarkable work over the length of his career, but he's always been a supporting man locked in a leading man's body. Now, he is given the freedom to run with a great role, and instead, he flew. The Commandant is a raw and vicious character, vile and manipulative and Elba easily breaths life into him and makes it all look effortless. I hope this generates a lot of buzz because Elba has been gearing up for something like this for quite sometime now and I think he more than deserves it.

I also think Abraham Attah could also be a worthy contender in the actor race. Usually, I have always felt that putting a child in the Oscar or awards race is more of a gimmicky publicity stunt rather than an honest nomination. But in Attah's case, its the complete opposite. I don't know where they found this kid, but he awesome, plain and simple. The entire movie rests on Attah's shoulders and if he wasn't strong enough, the film would have failed. We feel Agu's loss of innocence, he's need to prove himself, his fear, his despair. These are wide emotions for any child actor to convey, and much like Elba, he makes it all effortless.

I think lots of people like lighter toned movies, and there is no question that "Beasts of No Nation" is a heavy experience, but that doesn't mean it isn't a ride not worth taking. It is a brutally beautiful, hard fought morality fable. The cast of actors makes it count every step of  the way, and if they believe in it, we believe in it. This is what great filmmaking is all about, getting the audience to believe in your story, and even though it takes you to places you don't want to go, it does so with a zing of inspiration and a confident heart. It is rather hard to look away.

This is also a big moment for the movie business itself. Netflix just made a big push, and it could change film media forever. This is the first time a streaming service has released a movie on their own, and I am dying to see how this weekend plays out for them. I am curious to see any changes this makes on the business of movies, and exactly how those changes will take place. This is a huge moment we are living in and all I can say is support this film. Let's see how bright this future can be.