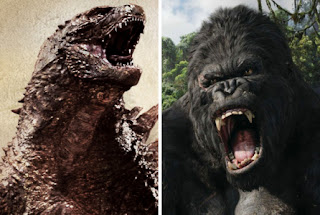 There has been a "Skull Island" movie in the works since around 2014 or so, relaunching a new King Kong franchise. This "Skull Island" movie at first belonged to Legendary Pictures studio. Today, the movie moved to Warner Bros Studios, the same studio that brought you Godzilla. This obviously happened on purpose, as of now there is going to be a movie in the near future pitting the two iconic monsters against each other. There is no release date or story details yet, just a tight blueprint. We know this movie will come after the upcoming "Skull Island" movie as well as the upcoming sequel to the 2014 "Godzilla" movie. But soon, these two titans will clash onscreen once again at a theater near you.

I will be interested to see how this goes down. There have been rumors that the "Skull Island" movie will take place in the 1970's, so I guess King Kong will be a baby that grows up by the time this Godzilla vs. King Kong movie hits, as the new Godzilla took place in present day. The upcoming "Godzilla" sequel will feature a huge host of iconic monster villains that Godzilla has fought over the years. So it will definitely be interesting to see how things play out. I liked the 2014 "Godzilla" movie, it was hell of a lot better than that piece of crap that came in 1998, so now I am curious to see what happens next.

What do you all think?

Posted by Shawn Hoelscher at 10:13 PM